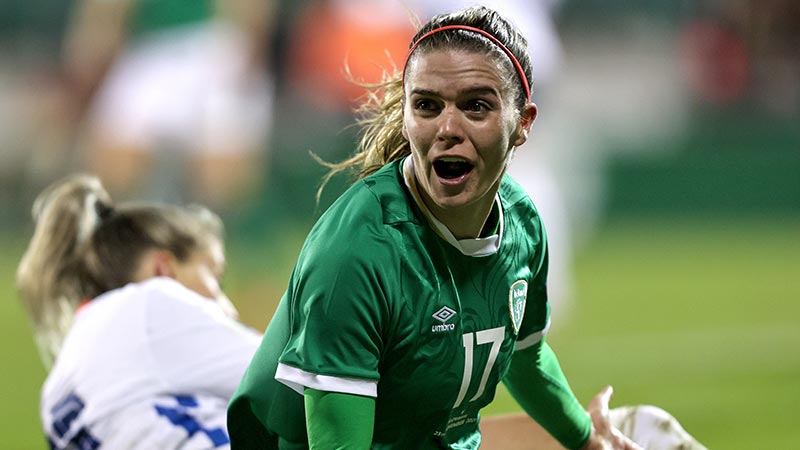 The Republic of Ireland Women's team came from behind to draw 1-1 with Slovakia at Tallaght Stadium tonight.

It was a slow start from both sides early on during a relatively quiet first period but it was Ireland who had the better of the chances.

Wing backs Áine O’Gorman and Katie McCabe looked dangerous from the start and it was O’ Gorman’s cross which produced Ireland’s first real chance on the half hour mark. Her ball found the head of Lucy Quinn but her header was saved by Korenklova.

Slovakia’s best chance fell to captain Dominika Skorvankova who found space inside the Irish box. Thankfully for the Girls in Green, Brosnan saved well to keep the scores level.

The hosts came close again when Katie McCabe’s corner found Louise Quinn at the back post but her header was saved by Korenklova.

The sides went in scoreless at the break.

Slovakia got off to a perfect start in the second half when Metavkova broke down the right wing before crossing the ball into Surnovska at the back post who finished from close range to give the  visitors the advantage.

Ireland did find an equaliser with just over 25 minutes remaining. Denise O’Sullivan played the ball into the path of Katie McCabe who fired home first time into the bottom corner sending the Irish faithful crazy.

Slovakia grew back into the game and Boroova almost put Peter Kopun’s side back in front with an effort at the back post which was saved well by Brosnan.

Brosnan almost went from here to villain moments later when Surnovska nicked the ball off the Irish keeper inside her own area, but thankfully for Brosnan and Ireland, Louise Quinn made a fantastic block off the line to keep the scores level.

The game ended 1-1 with Ireland now sitting in fourth place ahead of their upcoming game against bottom seed, Georgia.