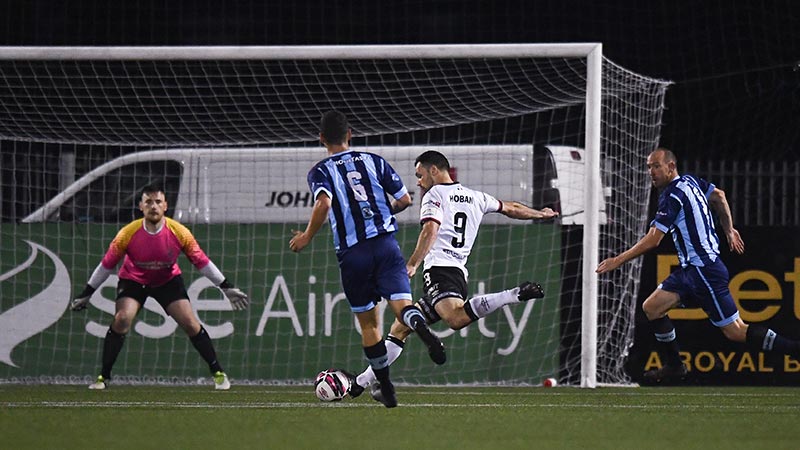 A quick-fire hat trick by Patrick Hoban ensured Dundalk had a safe passage to the quarter-final of the FAI Cup against non-league side St. Mochtas FC.

Dundalk didn’t have it easy however as Mochta's gave them quite the scare in the first half as a spirited effort gave them their just rewards as Gareth McCaffery had cancelled out Sami Ben Amar’s first goal in a Dundalk shirt.

Han Jeong Woo got a fifth as the Lilywhites quest for a seventh cup final appearance is intact. For the Oriel Park outfit, the FAI Cup is the final show in town when it comes to a chance to get silverware, something that both Vinny Perth and his players are well aware of.

Looking to avoid a cup upset from the start, Dundalk took the game to the visitors and began brilliantly as Patrick Hoban’s corner was met by Sami Ben Amar who headed it past Adam Kmet with ease.

They, however, failed to keep the momentum going and allowed St. Mochtas back into the contest and a defensive slip from Sonni Nattestad allowed Gareth McCaffery to capitalise as he slotted it past debutante keeper Cameron Yates to equalise. Despite that setback, both sides had chances to take the lead but neither side failed to do so.

It would be a different narrative in the second half as Dundalk put the match to bed in ten minutes.

Patrick Hoban leading the line got the first of his three goals in ten minutes as Ben Amar was harshly taken down in the area and the referee had no option but to point to the spot. Hoban sent Kmet the wrong way to put the home side back in the lead and he put the game beyond doubt some 60 seconds later. In the next phase of attack, he evaded his marker and struck a low curling effort past Kmet before adding a third goal eight minutes later as he latched onto a Sean Murray through ball and with one clever touch Dundalk's number nine slotted the ball past the St. Mochtas netminder.

With the pressure value well and truly released Dundalk continued to press and got their fifth of the night as Han Jeong Woo netted his second career goal for the Lilywhites by picking up a loose ball inside the area to slot it into an empty net.

Dundalk will have tougher games in his competition but banana skins like this are always a threat to derail the season. This can be considered a confidence-boosting win in what has been a bruising few weeks for the Oriel Park men.