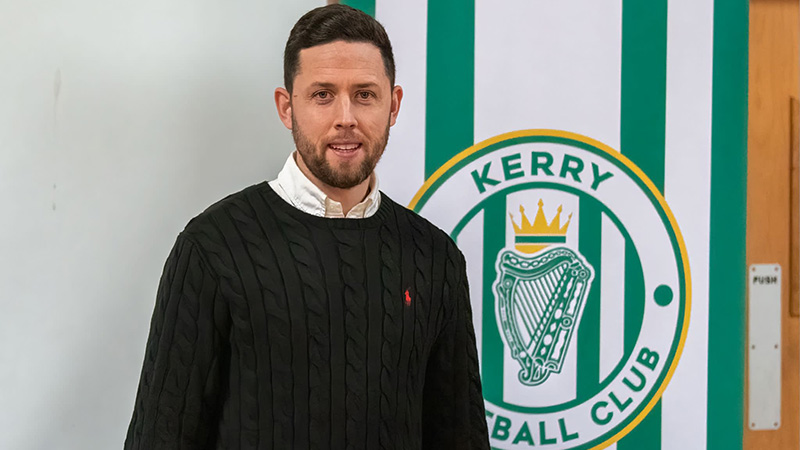 New Kerry FC manager Billy Dennehy says it is a proud moment for him to be able to manage the club ahead of its inaugural season in the League of Ireland in 2023, a role that took little consideration in his mind to accept.

Speaking on Monday evening after it was confirmed he would be in the dugout for next season, he spoke of his pride of being named manager while also his love at finally seeing a dream of his come to fruition that Kerry now has a platform for players to play in the League of Ireland.

“It’s another landmark moment in the short history of this club Kerry FC in relation to the manager’s post, it was something that I took into consideration for the past couple of weeks. If I didn’t accept the opportunity something that I might live to regret it,  so it is a very very proud moment for me and for my family and very grateful to be able to lead the team out in the first game of the season, League of Ireland here at Mounthawk Park.

For me I am a very proud Kerry man and proud of where I am from, I’m very proud of the start that I had in the game here, the amount of volunteers that go in to to keep grassroots football going, to give young players a chance a opportunity to play the sport, from there giving an opportunity for players to excel and to strive to play at a higher level.“

Dennehy is a native of Tralee and would have began his career with Tralee Dynamos who are adjacent to Mounthawk Park, which has undergone a facelift in recent months ahead of its debut as a senior LOI ground next season, he also played for Kingdom Boys before moving to Sunderland before coming home to see out his career in the League of Ireland, the dream of playing Senior soccer in the county was one he always had on his mind, since retirement Kerry FC was a vision and he is now proud to see the club take off after a number of successful years at youth level.

“It wasn’t there in my time, I always thought when I was representing many clubs that I would love to be doing this in Kerry also, then when I retired and came back coaching, I was asked the question why are you starting your coaching career in Kerry, why would you not go to other clubs or other areas where you can progress.

But for me it was about coming back and starting something where I feel like I started my playing career, I could see this so clearly and so consistently for so many years that this was possible, I used to be telling the likes of Sean O’Keeffe (Kerry FC General Manager) and everyone around here that this is possible we can do this, like why not and I think players historically over many many years have been showed that that they were talented soccer players.

They’ve always had the ability, they just didn’t have the platform to show it here and now what we’ve been able to create, is a platform that young players can now come into the club and strive to play at the highest level in the country while living at home and that’s something again in the bigger picture is something that we are all proud to be able to give to the area of Kerry now.”