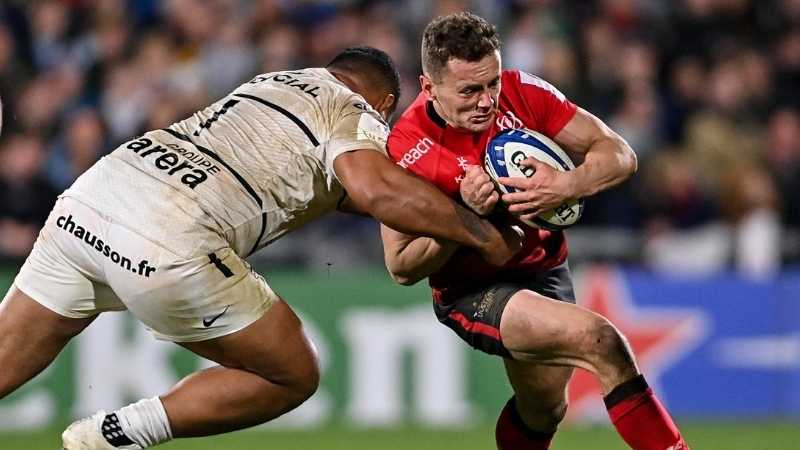 Ulster's European dream came to an end in the last-16 as Toulouse edged a dramatic Heineken Champions Cup last-16 tie 50-49 on aggregate after a 30-23 win at Kingspan Stadium.

Tom O'Toole's late red card for a high tackle on Anthony Jelonch with 15 minutes remaining proved decisive as it allowed Antoine Dupont to dive over with five minutes remaining for the killer score to send the defending champions into the quarter-finals, where they will meet Munster.

It was a thrilling tie in front of a sold-out crowd at Kingspan Stadium, with Ethan McIlroy's double seemingly enough for Ulster to win before the late double hammer blow of O'Toole's sending-off and Dupont's game-winner.

Thomas Ramos kicked Toulouse into an early lead before both teams were reduced to 14 men, Robert Baloucoune seeing yellow for taking out Anthony Jelonch in the air before Dimitri Delibes was dismissed for a tip-tackle on McIlroy.

The winger then struck, sent over in the corner by James Hume to give Ulster the lead, and Ramos and John Cooney then traded penalties before Toulouse ran in two quick tries of their own as a fine team effort saw Ramos cross before Romain Ntamack intercepted a Cooney pass and ran it back.

Ulster would lead the tie at the break, though, when McIlroy took Billy Burns' cross-field kick over and then Cooney extended their lead with a penalty shortly after the restart, although they were perhaps fortunate not to see Mike Lowry sanctioned for taking out Ramos in the air.

But after the full-back sent over a third penalty, they were taken down to 14 men as O'Toole saw red for his hit on Jelonch, and Dupont broke home hearts with his try just five minutes from the end to send the visitors through to the quarter-finals.