Advantage Ulster after win in Toulouse 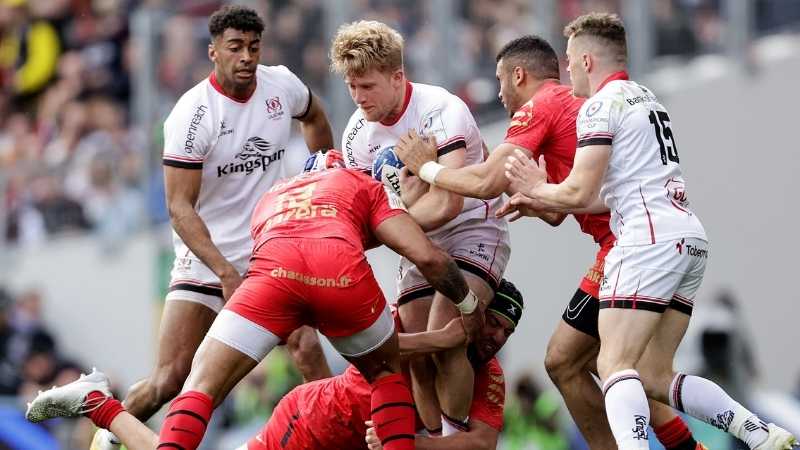 Ulster will take a six-point lead into the second-leg of their Heineken Champions Cup last-16 tie after a sensational 26-20 win over 14-man Toulouse at the Stadium de Toulouse.

Ireland winger Robert Baloucoune notched a hat-trick and Andrew Warwick also crossed for the visitors as they benefited from the 11th-minute sending-off of Juan Cruz Mallia for taking out Ben Moxham in the air to walk away with only their second ever away win in the Champions Cup knockouts.

However, Toulouse will come to Kingspan Stadium next week with a bit of pep in their step after Romain Ntamack's late try, which could yet prove vital in the context of the tie ahead of next Saturday's return game.

There were early fears for Ulster when Toulouse lock Emmanuel Meafou barged over after just seven minutes, the hosts flexing their forward muscles, but Mallia's sending off for his tackle on Moxham levelled the playing field.

Baloucoune immediately crossed off the resulting penalty to level proceedings, but Ulster couldn't find another score for the break despite their numerical advantage and instead two Thomas Ramos penalties had the hosts 13-7 to the good at half-time.

But Baloucoune went over just five minutes after the restart off Stuart McCloskey's line break for his second, before Matthis Lebel had a try chalked off by the TMO for a knock-on in the build-up by Antoine Dupont.

That allowed Ulster to seal the victory and the advantage going into the second-leg, Warwick burrowing over from close range off the back of a maul and then Baloucoune picking off a pass from Dupont and running it the length of the pitch for the try.

But Ntamack went over for a late sting to put the tie within a try going into the return leg, which should be a thrilling occasion at Kingspan Stadium.