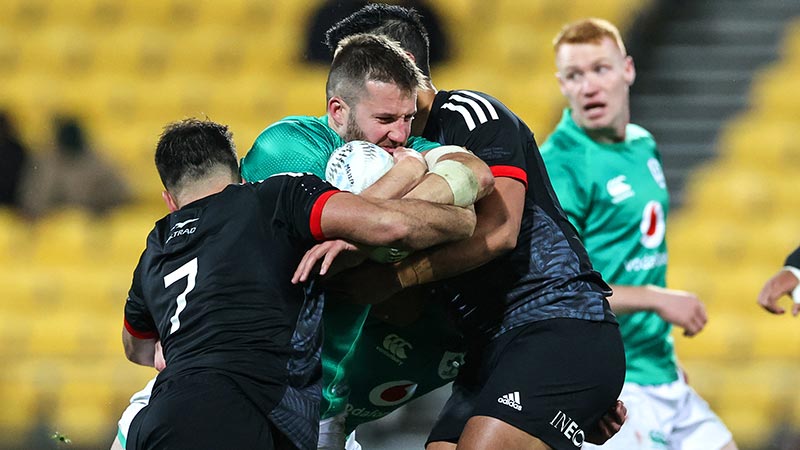 Just four days after their historic win in Dunedin, Ireland have also earned their first win over the Maori All-Blacks, beating them 30-24 this morning.

The win at the Sky Stadium in Wellington now levels both Test Series' at 1-1, and Ireland will meet New Zealand next on Sunday at the same stadium.

With much of the same team featuring from the comprehensive 32-17 defeat in the first test, Andy Farrell's men were unrecognisable in comparison. Early errors provided worrying signs of a repeat of the previous meeting, but soon Keith Earls found Jordan Larmour for a try and Ciarán Frawley converted, leaving Ireland 10-5 ahead.

"Watching the boys last week on the side-lines we had a lot to live up to tonight, we did ourselves proud," Larmour told Irish Rugby Media. Larmour was the source of the game's first and last scores and noted that Ireland made it difficult for themselves at times but are delighted with the result.

At the interval Ireland led 17-5 as they gradually cut mistakes out of their game and continued to pose an attacking threat. Nick Timoney got over the line before Frawley once again converted to the leave the Irish 12 points ahead at half-time.

It wasn't plain-sailing though in the second-half and Ireland had to deal with the obstacle of Larmour's sin-bin for an off the ball tackle on the Maori's Conor Garden-Bachop. They held their nerve for this period by defending well, and Gavin Coombes scored a try with 10 minutes left to make it 25-15 in his sides favour.

The Maoiri's continued to fight but a missed conversion after Ruben Love's try was costly, and eventually Ireland had the game wrapped up through Larmour's second. The victory marks their first win over the Maori All-Blacks in five meetings, and a second historic win in quick succession.

Earls captained the young side who watched on as Ireland defeated New Zealand on the weekend, spoke of this role as one of his "proudest moments. "It was a huge honour to captain such a young side, getting their first win in an Irish jersey down in New Zealand and we did it together," said Earls.