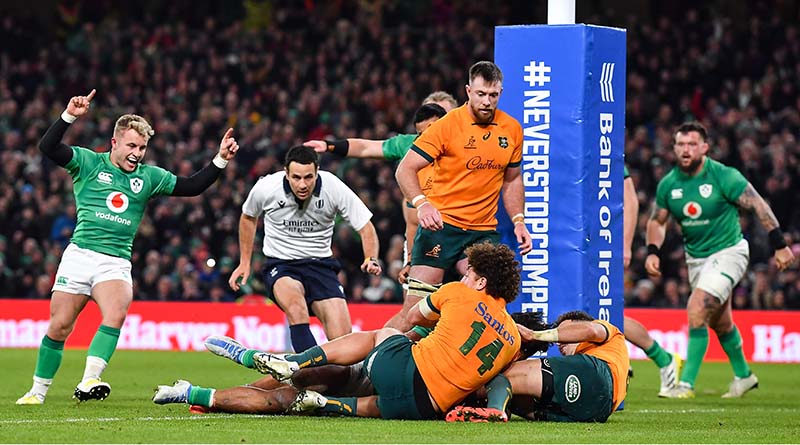 A peerless late pressure penalty from substitute Ross Byrne rescued a late victory for Ireland in a scrappy encounter against a dogged Australia, as they squeezed to a 13-10 win.

The Wallabies were looking to avenge two narrow defeats from their last outings, and they were unfortunate to have a try disallowed early on, hooker David Porecki penalised for a neckroll.

Jack Crowley had been drafted into fly half after Johnny Sexton was injured in the warmup. The Munster man passed his first major test on ten minutes, slotting a penalty for 3-0.

As the first half progressed, Australia bossed territory but were unable to find the killer pass to unlock a resolute home defence.

Not that Ireland fared any better offensively.  Even with a man advantage, Porecki’s replacement, Folau Fainingas sin-binned, did they threaten but Dan Sheehan’s effort from a driving maul came up short.

After the interval, Mack Hansen’s dancing feet freed Jamison Gibson-Park to score but the winger had had a foot in touch, and it remained just 3-0.

Foley, having missed a kickable penalty earlier, slotted one for 3-3.

A dissatisfied Andy Farrell emptied the bench and two substitutes combined as Bundee Aki marked his return from suspension with a try after Craig Casey’s increased tempo and accurate pass created the space for Connacht’s Aki to barge over.

Moments later though, it was Australia’s substitute, Jordan Petaia who pooped the party, dotting down in the corner for the tenacious visitors.

Foley levelled with a composed conversion and the match, whilst low scoring, was on a knife edge entering its end.

But it was another 10, Ross Byrne, who made himself a hero with a superb penalty, from the angle, nudging Ireland ahead again, by 13-10.

Despite a botched lineout, the hosts stumbled over the line and this, albeit jammy, win rounds off a satisfying Autumn’s work.  Wins over the three momentous Southern Hemisphere teams are to be applauded.

Three wins from three, twelve unbeaten (just) at home and the Six Nations are next on the horizon after a momentous year of results for Irish rugby.