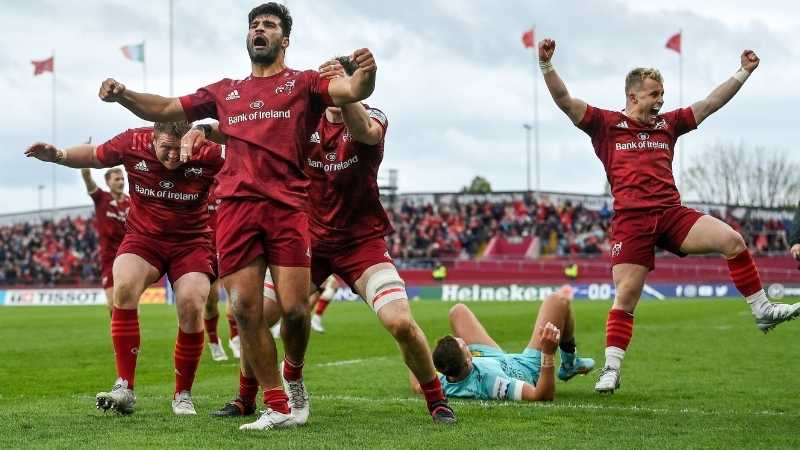 Joey Carbery inspired Munster to make the quarter finals of the Heineken Champions Cup, as they came out 34-23 winners on aggregate, following a 26-10 victory at Thomond Park over the Exeter Chiefs this afternoon.

Carbery kicked 21 of Munsters points tally this afternoon, he was pivotal in the Munster backline as they managed to overcome the deficit.

The visitors looked to have gotten ahead after the restart, getting their second try early in the half but missed conversions cost them dearly, as the hosts managed to hold firm for a hard earned win.

Munster worked well early on to turnover an Exeter attack, after going up the other end Joey Carbery landed a penalty from range, to give them a 3-0 lead after six minutes.

After a strong start Munster were hit with a double blow after 11 minutes, Conor Murray shown a yellow card after Sam Maunder crossed for the Chiefs opening score to put them into a 5-3 lead.

Carbery restored the Irish provience’s lead after 18 minutes, kicking another penalty this time from a shorter distance, they led by the minimum as they looked for a further breakthrough.

The Munster fly half was his side's biggest inspiration in the opening half, he got their opening try after faking the defence well to glide his way to the try line to touch down, he added the conversion for a 13-5 lead after 27 minutes.

Cracks began to appear for Munster as the half wore on, again turnovers and penalties starting to see Exeter get more possession and a late penalty by Joe Simmonds, from nearly half way out the field could have reduced the arrears but his kick drifted wide.

The visitor’s continued their charge after the restart, they worked hard to attack the Munster line keeping pressure on their defence, in the end Jacques Vermeulen bundled his way over for the second try, making the Munster lead three points on the day, but the English outfit lead by two on aggregate.

Carbery again was the driving force to see them back into the lead on aggregate, his kicking vital for the hosts they lead by one on aggregate after the hour mark. He replied with another monster kick to give Munster a 19-10 lead on the day, while leading 27-23 on aggregate after 65 minutes.

They tide turned in favour of the Shannonsiders as Exeter were being pinned back into their half, attacks started to flow and with a penalty advantage their way they offloaded wide to Simon Zebo, he sprinted down the wing before he found Damian De Allende who dove over to score, his try making it 34-23 on aggregate as Carbery again landed the conversion.