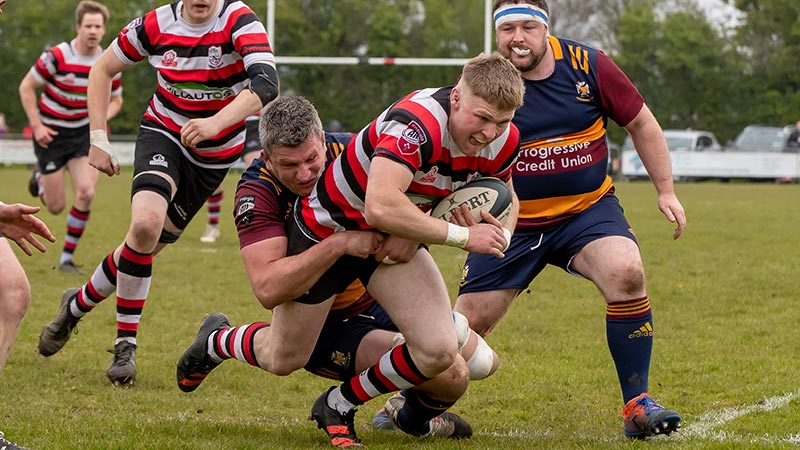 Enniscorthy are promoted to the Division 2B, after a powerful 41-14 win over Skerries.

The league leaders had been the yard stick in the competition for a lot of the season, their opponents the closest rivals to getting promoted, they failed to keep up with the pace this afternoon.

Skerries looked strong but will have to do it all over again next season, a five try route by the Wexford outfit seeing them leave Alcast Park victorious.

It was the hosts and league leaders who hit the break early, laying siege to the Skerries line trying to find a gap, they eventually opted to go out wide and the ball found a way to Dominik Morycki, who managed to touch down in the corner.

Ronan Mulcahy had the first opportunity at points for Skerries, with 19 minutes gone in the opening half but the full back saw his penalty clip the left upright and bounce wide, it remained an Enniscorthy game leading 5-0.

He did however get them on the board on the second time of asking, landing a penalty in the 23rd minute to cut the gap down to just two points, 5-3.

Skerries managed to lead by the minimum on the 34th minute mark, a high tackle by Nick Doyle saw him go to the sin bin, Paul O’Loghlen kicked the resulting penalty as Mulcahy had to leave the field with injury.

It only took a few minutes for the hosts to cancel out the earlier penalty, Ivan Poole landing a kick from short range, a vital component he has been so far this season for the Wexford outfit, they now were ahead 8-6 with 36 minutes elapsed, an advantage they would hold to the break.

Just five minutes after the restart, O’Loghlen was again accurate from the tee, another penalty coming from a close central position, the advantage just a point 9-8.

Two minutes later the hosts hit hack again, their second try of the afternoon after a lovely pick and go move, the Italian prop Angelo Todisco getting under the posts, Poole added the extra two points, to put them six points ahead.

Daniel Pim was next to cross for Scorthy, from a turnover he ran almost the length of the field before crossing over as the hosts were looking comfortable thanks to the Poole conversion, seeing them 22-9 in front after 54 minutes.

Kevin McGrath has been a pivotal player for Skerries this season, the captain leading the charge to cross for their first try on the hour mark, the missed conversion seeing Enniscorthy ahead by eight 22-14.

As it looked like Skerries were about to come into the tie again, the Wexford powerhouse kept them at bay before adding their fourth try after 70 minutes, his try made it 29-14 as Poole landed a monster conversion from the sideline.

One became two minutes later Morycki again crossing in the corner a dramatic two minute swing at the end of the half seeing them lead by 20 points 34-14, before Tom Ryan sealed the result five minutes from time with a fifth try of the afternoon.