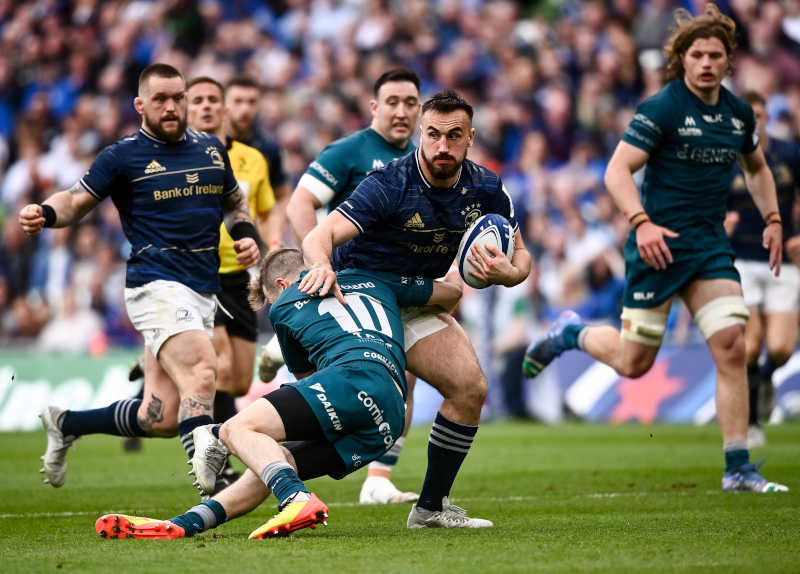 Lowe was in superb form throughout the two legs, as he scored an impressive six tries as Leinster continued their dominance over Connacht. Leinster have won nine of their last 10 games against the Galway province, and this one was as one-sided as it got.

The hosts scored eight tries as Jameson Gibson-Park, Tadgh Furlong and two tries from Robbie Henshaw joined Lowe on the scoreboard to help Leinster ease to a comfortable 82-41 win on aggregate.

As for the visitors, they failed to build off an impressive display last Friday as they trailed 28-3 at the break. Things got worse after the break as Connacht lost Finlay Bealham to a head injury, and were forced to play a spell with just 13 players after Jack Aungier was sin binned for a shoulder charge.

Indiscipline haunted Connacht throughout the evening in Dublin as the visitors saw yellow twice on Good Friday. Whilst the infamous uncontested scrums law controversially returned to Aviva Stadium once again as Aungier’s yellow-card meant Connacht were forced to play with uncontested scrums for a brief spell, and amazingly Connacht only conceded once in that spell.

However, it didn’t start out that way for Connacht, as the visitors produced the perfect start. Jack Carty’s early penalty got the hosts on the board.

But that proved to be as good as it got as Gibson-Park raced away for Leinster’s first of the evening, before Henshaw brushed off a poor Bundee Aki tackle to score the second for Leo Cullen’s men.

It wasn’t long before Leinster picked up their third as Tadgh Furlong crashed over from a pick & go to make it 21-3 after 30 minutes. Things got worse for Connacht moments later as Bundee Aki was sin binned for a high tackle on Sexton, and the hosts made Connacht pay.

Lowe grabbed his first just before the break after an intricate bit of play between him and Sexton, while Henshaw quickly added his second moments after halftime to make it 35-3.

Connacht briefly threatened a fightback as Tiernan O’Halloran crashed over after a well-worked move down the left channel, but were soon down to 13 men after Jack Aungier was yellow carded for a high tackle on Josh Van Der Flier.

As a result of the yellow card and Finlay Bealham’s head injury, it saw a return of the controversial law that occured during Ireland’s test match against Italy weeks ago, and Connacht conceded their sixth not long after as Lowe grabbed his second of the day.

Despite facing imminent defeat, Andy Friend’s team showed an act of defiance as tries from Sammy Arnold and Abraham Papalii added some respectability to the scoreline.

However, the hosts had the last laugh as Lowe added a further two tries in the final ten minutes to put the nail in Connacht’s coffin.