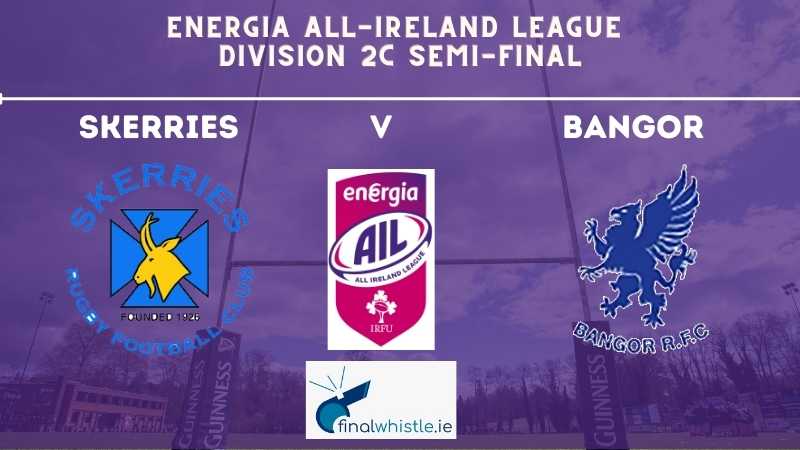 Skerries came out on top, by a slender margin in an eight-try thriller, where it finished 32-29 in the home sides favour at Holmpatrick to advance to the Division 2C decider.

Bangor got out of the blocks first on a beautiful day, if a little windy; on the artificial pitch in Skerries.

The visitors opened the scoring thanks to a Gareth Miller penalty,

Skerries kicked the game off towards the Churchfields end some nervy periods of play ensued. Bangor created a good attack and were soon rewarded with a penalty which Gareth Millar, the outside half converted. Skerries then had a period of pressure and a good line out take by Tom Mulvany and subsequent maul was rewarded with a penalty which Ronan Mulcahy slotted to bring the scores to 3-3.

In the 11th minute the Bangor backs carved open the Skerries midfield and Shay Storey scored a good try which was converted by Millar to make the score 3-10. Three minutes later a good Skerries attack was rewarded with another successful penalty for Ronan Mulcahy. Some kick tennis then took place, when Bangor did decide to run, Tom Mulvany stopped them in their tracks with a thunderous tackle.

At this stage of the game Bangor were having the better of the set pieces whereas Skerries were threatening from box-kicks and counter attacks with the terrier like Lorcan Jones to the fore.

The Bangor penalty count was starting to creep up and from one such discretion, Ronan Mulcahy had a rare miss.

Oisin McKey started to make increasing yardage and from one such carry followed by some good controlled one-out plays from Ross Halligan, Colin Doyle powered over. The try was converted to make the score 13-10.

The last two minutes of the half saw Skerries defending stubbornly and the cagey first half ended at 13-10.

Skerries replaced Eoghan Carron with Shane Murphy and started the half brightly enough with a couple of good carries from George Harrington. The Skerries scrum lost a strike against the head and Bangor had a couple of line breaks where the last pass just did not connect. Eventually Mike Weir the Bangor No. 7 crashed over and Millar added the extras to make the score 13-17.

Bangor dominated the third quarter and a brilliant 50:22 from the full back Danny Young led to another good attacking platform, this was repelled by some good tackling and jackling by Kieran Leonard and George Harrington.

The effervescent Ross McAuley was starting to carry more and Skerries put together a good sustained attack. Outside half Paul O’Loughlen saw some space on the outside and threw a speculative miss pass which was intercepted by Shay Story who ran the length of the pitch to bring the score to 13-22 as the difficult conversion was missed.

Skerries needed an immediate response and it was emphatic with O’Loughlen kicking a great contestable drop out which Tom Mulvaney fielded and a short pass to Oisin McKey saw him score in the left hand corner. This was in the 56th minute and the score now was 18-22 so all to play for.

Skerries had replaced Cormac Murphy with Johnny Sherwin and this settled the home sides scrummage. The Skerries lineout continued to wobble at times and some nervy mistakes crept into the game.

Skerries attacked with good intent down the left hand side and from another penalty against Bangor, Shane Murphy tapped and scored from 5metres. This was converted by Ronan to now make the score 25-22. There was still 10 minutes left.

Bangor had a good period of pressure and in the 87th minute Conor Lusty scored after some intricate midfield play. This was well converted by the excellent Millar and we were now at 25-29 with 2 minutes left to play.

Skerries needed the ball and they got it after another good drop out chase and tackle into touch. Tom Mulvany was replaced by his brother Jim and the Skerries faithful knew this was probably the last play of the game.

The extras were irrelevant as time was up but Mulcahy slotted them anyway to make the final score 32-29.

This was an absolutely thrilling contest. Bangor are an excellent side with good set-piece and really threatening young backs. Skerries were tenacious and kept their discipline well throughout.

The self-belief to keep battling to the end was excellent and the large crowd were rewarded with a great afternoon’s entertainment. This was a great advertisement for the AIL and club rugby.

Skerries go on to play Enniscorthy in the final next week as they narrowly beat Tullamore 12-9. Another emotional afternoon beckons.