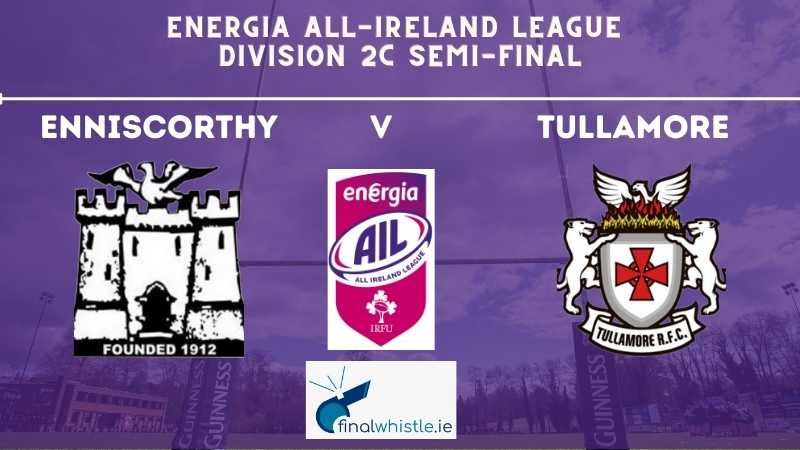 It was the late late show on Saturday last in Alcast Park when with 5 minutes remaining Enniscorthy’s top try scorer this season Nick Doyle at last breached the Tullamore defence to touch down for a vital 2nd try which put them 3 points clear as the clock ticked down.

It looked like the impossible was going to happen on an afternoon when the home team justifiably went into the game as favourites after their massive haul of 78 points in winning the league. Tullamore had different ideas and they put in a magnificent shift and ensured the game went down to the wire with few nails left on the home teams supporters’ fingers at the final whistle.

There was a gale force wind blowing straight down the field from the Ross road side.

Tullamore had that advantage in the opening 40 minutes and all Enniscorthy could do was carry the ball to the opposition which they generally did very well although they did concede quite a few penalties.

Enniscorthy had to start without the experienced Ivan Pool at out half who had a neck injury although he did come on midway through the 2nd half. Ben Kidd started in the 10 shirt and did well.

James Doyle who had been in training camp with the Irish U19’s started and he had a big impact.

There was just 8 minutes played when Tullamore won their 1st penalty with the home backs straying off side. Scrum half Conor Dunne nailed the kick from the half line which was an indication of the strength of the wind .

Enniscorthy had to defend for their lives but it is a dangerous game and the penalties flowed for Tullamore with Dunne scoring a 2nd kick after 20 minutes for a 6-nil lead. There was a blow for Enniscorthy when Ivan Jacob went off injured on 28 minutes and was replaced by Dominic Morycki also Niall Parker left the field to have some running repairs although he did return for the 2nd half. He was replaced by David Farrell.

There were a couple of forages by the home team in the opening 40 minutes but they were few and far between..

Dunne had 2 further penalty opportunities but missed both as Enniscorthy eventually got good going forward ball.  Nick Doyle and David O’Dwyer combined down the left wing but Tullamore’s Liam Farrell pulled off a super tackle. In the 35th minute Enniscorthy pounded the Tullamore line with James Doyle and Timmy Morrissey carrying strongly and they eventually created space out left but Nick Doyle was held up over the line. There was one more chance before the break when another super move again down the left wing Liam Stamp and Davie Murphy with the carry and Tullamore conceded a penalty which Enniscorthy wanted to take quickly but the touch judge entered from the side-line and he saw an infringement at the break down and the penalty was reversed and Dunne duly responded with a super strike to split the posts and a 9 nil half time lead. It was a silly penalty to concede.

The big question for the home team now was could they chase down that lead in the 2nd half and they made good work of it after just 8 minutes when sustained pressure was eventually rewarded with Angelo Todisco crossing the whitewash close to the post and Ben Kidd adding the conversion. Tullamore were down a man when hooker Cathal Feighrey was sin binned previous to the score which was well worked from a line out and terrific carry’s from James Doyle and Timmy Morrissey in particular.

If the home supporters expected the flood gates to open then they were to be disappointed as Tullamore’s stubborn defence held firm for long periods of that 2nd half and Enniscorthy didn’t help themselves by giving away needless penalties as they were now forcing the game.

With 60 minutes on the clock one such penalty from Dunne almost saw Tullamore score but again the defence was superb in fact James Doyle picked up a spilt ball and broke clear down the right wing from his own half and almost got home but an excellent tackle from full back Brian Geraghty pushed him into touch but he flung the ball back and Ben Kidd racing in support picked the ball off his bootlaces and was stopped short of the line. Enniscorthy introduced Ivan Poole but through a succession of unforced errors the break through looked dodgy even though the Tullamore players were out on their feet after their heroics. Enniscorthy eventually made the break though and after recycling the ball with pick and go’s after the 10th phase Nick Doyle crashed over on the club house side. Ivan Poole just missed the conversion. Tullamore were drained and the home team comfortably played out the additional 5 minutes of injury time to secure the victory which always looked on but as the clock ticked down nerves were frayed.

It was a fierce battle up front with both sets of forwards giving their all.

Enniscorthy Coach Ben Manion“ I’m lost for words .What a tough match and credit to Tullamore they almost made us pay for our ineptitude to put them away . They defended for their lives and they really cut down our space.We gave away far too many careless penalties and we know we can’t do that the next day. The wind just did not suit us at all has we had to carry the ball for most of the game. I must give the players credit though for generally keeping their composure but it was a tough day at the office and now we meet arguably our great rivals this season Skerries who also won with a late try. It will be a tough one but as it was before kick off today our destiny is now