2B Semi: Stones leave it late to defeat Corinthians 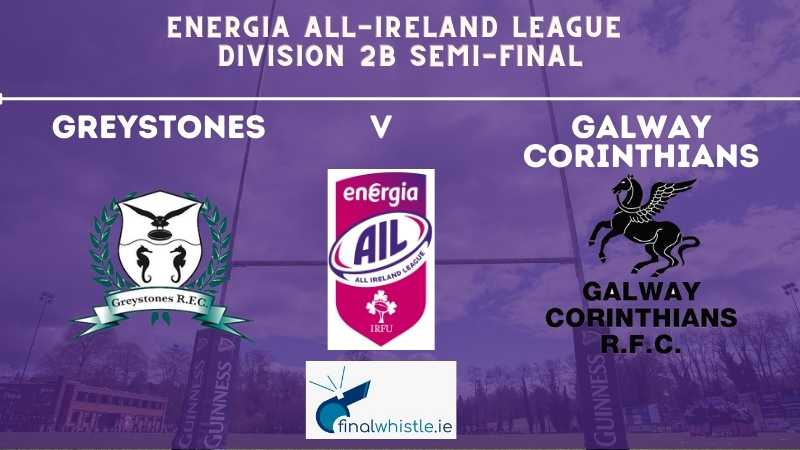 A late try from Greystones' Killian Marmion and a brace from Con Callan secured Greystones spot in the Division 2B Promotion Final after a 19-14 win over Galway Corinthians at Dr. Hickey Park.

Stones got off to a perfect start after their early territory inside the Corinthians 22 metre line. Captain Killian Marmion weighted a beautiful grubber king in behind the Connacht side’s backline which almost fell perfectly into the path of Andrew Lynch.

The electric Greystones winger couldn’t grasp the ball, but centre Con Callan was alert and touched down after just over two minutes on the clock.

The game was played in very windy conditions which impacted Killian Marmion’s follow up conversion attempt.

From here Greystones dropped back and invited pressure onto them. When Marmion was sin-binned for a high tackle just after the quarter of an hour mark, it looked like it wouldn’t be long until the Galway outfit broke through. Thankfully for the hosts, their defence remained resilient and held off the attempting Corinthian attacks.

Corinthians made some big carries through back rows, Cian Huxford and Colin Joyce but they couldn’t make their pressure count as unforced errors continued to haunt them throughout the first period.

Stones began the second half in almost identical fashion to the first with Con Callan intercepting a wayward Corinthians pass before diving under the posts for his second of the game. Killian Marmion converted and increased their lead to 12 points.

The visitors increased the pressure again after conceding and their efforts were rewarded when Josh Rowland made a great line break, carving through the Greystones defence. The centre then popped the ball into the path of Mark McDermott who dived between the posts to reduce the deficit.

Galway Corinthians equalised after a series of missed tackles led to substitute Evan Coyle bursting through the defence and over the line. Cathal Forde followed up with the conversion, into the wind to give his side a two-point lead heading into the final 15 minutes.

Kevin Lewis' side pushed relentlessly for a winning score and after big carries from Iva Takatai and Eoin Marmion, Killian Marmion opted to spread play wide to Andrew Kealy. The Stones’ full back spread the ball all the way to the right flank into the hands of Ferdia Kenny, but Greystones top try scorer this season couldn’t keep the ball in control and knocked it on just metres from the tryline.

Marmion converted to increase their lead to five points.

Corinthians pushed until the final minutes but Greystones’ stellar defence remained resilient and secured their spot in the final.