2A Relg P/A: Nothing to seperate Rainey and Nenagh 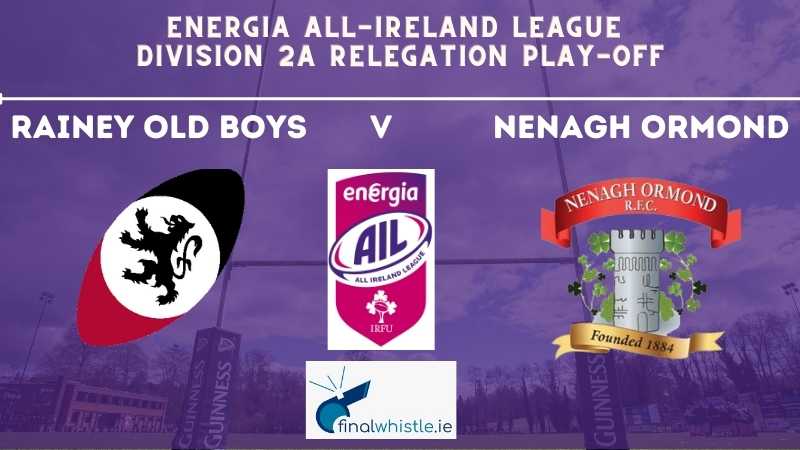 Very nip and tuck first 15 minutes where it was evident that both teams were willing to put there body on the line for the cause.

Rainey won an early penalty but narrowly missed the kick. As the game continued it looked like both teams defences were not going to be broken until a Nicky Irwin snip resulted in a run in under the post which was converted by Conor McMahon. Nenagh had some impressive carries from John O Flaherty and Willie Coffey as the game began to open up Nenagh took the game to Rainey and followed up with a converted try by Willie Coffey. Nenagh went in at half time 14-0 up. Nenagh started the second half a little slower allowing Rainey forwards to take the ball to the line. Rainey came out in the second half knowing they needed to throw everything at Nenagh and were rewarded with a converted try. Rainey carried hard into the breeze in the second half with some great work in defence from Nenagh. Some big turnovers from Willie Coffey and Davey Gleeson and it looked like Nenagh were going to hold out. 5 minutes left and Nenagh looked to close it out when a big turnover from Patrick Scully as a Rainey forward was diving for the line. Nenagh gave away a penalty in the lineout which resulted in a yellow card for John O Flaherty from the resulting penalty a 78th minute try from Rainey expertly converted from a tough angle brought the match level at 17-17. Nenagh will take great confidence going into the second leg.The result makes for an enthralling second leg in Nenagh where there should be a bumper crowd. Some great performances throughout the squad in particular from Willie Coffey and Nicky Irwin in the backs and Rob Buckley, John O Flaherty and Fergal Brislane.