1B Relg P/A: Advantage Banbridge ahead of second leg 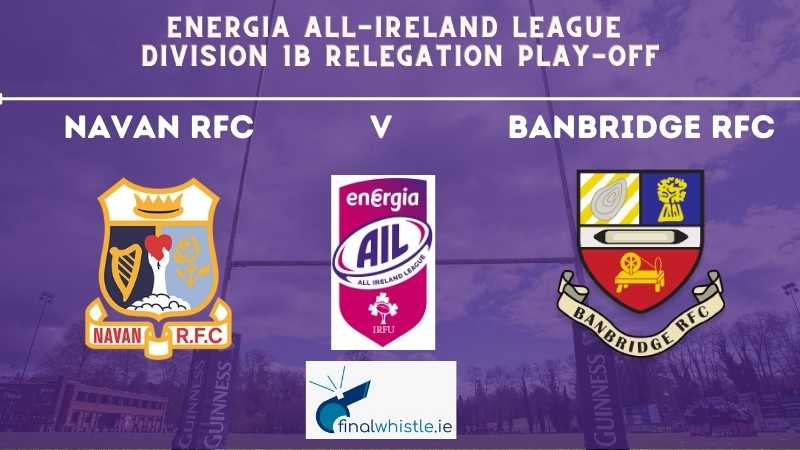 Banbridge came from behind to beat Navan in an entertaining first leg of their Division 1B relegation playoff.

Despite scrum half Mark Farrell kicking four penalties in addition to a try from Sean McEntagart, Navan were ultimately undone by two late, hammer-blow tries by Banbridge.

They were scored by Conor Field and Grand Slam winner with Ireland's U20s lately, Ben Carson, these scores allied with Brendan McSorley’s first half try plus Adam Doherty’s ten points from the tee, were enough to earn Bann an invaluable victory. As well as a precious first leg lead, with the return leg to come next Saturday on home territory at Rifle Park.

These two teams were contesting this relegation playoff courtesy of finishing bottom and second bottom in Division1B. Although both contested some memorable wins over City of Armagh, the sides had won only a combined total of eight matches all season. In a match that Navan’s own Facebook page described as “crucial”, the home side started strongly, scoring through McEntagart and restricting Bann to just the one score that was McSorley’s try.

With the away leg still to come, Navan knew the importance of trying to crave out a first leg advantage on home turf, at Balreask Old. And despite Farrell’s place-kicking accuracy, they were undone by a Banbridge side with Carson’s trickery and the talented prop Callum Reid, who has made ten appearances for Ulster, among their ranks. Bann establishing an eight point, (pivotally two score), gain going into the second leg could be both crucial for their comradery and illuminates the uphill task facing Navan.

At half time in this tie, its Banbridge in the driving seat.