1B Semi: Naas overcome Wesley to book place in final 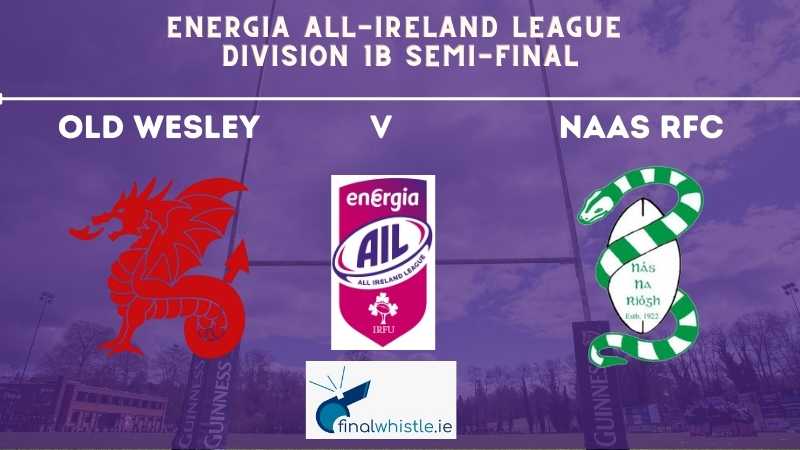 These two did not take long to get this show up and running. In the very first minute, Naas won a penalty just inside their own half and kicked for touch. A couple of phases of play followed the lineout and Ben Murphy played a risky pass to Gary Kavanagh, who ran through for the try with Peter Osborne adding two.

A penalty from Osborne followed soon after, but so did a Wesley try. In the 13th minute, they broke down the left and Poff passed inside to Tim Murphy, who took it in for five with Cassidy duly converting.

Wesley would go on top five minutes later. A lineout would lead to them driving their way in through sheer force, with Cronan Gleeson being the man to top it off, with the conversion making it 14-10.

Wesley thought they’d gotten an advantage two minutes later with a Donal Conroy sin bin, but James O’Donovan followed him in. A pair of Peter Osborne penalties saw Naas go into the half in front, 16-14.

The second half couldn’t have started much worse for Wesley. The first ten minutes saw James O’Donovan receive a red followed by a Sam Cahill try to leave them in a hole. Ian Cassidy would score another penalty to keep his side in it.

The next ten or so minutes should have seen Naas finish it. Tim Murphy and Donal Conroy earned tries with Osborne converting both, meaning Naas were up 37-17 against 14 men headed down the stretch. Then the mother of near comebacks happened.

In the 70th minute, Naas bulled in what looked like a consolation. Then about two minutes later, Alex Molloy cut open a whole in the Naas defence to set up a series of offloads that resulted in yet another Wesley try to set up a grandstand finish.

In the final minute, Naas received two sin bins to give Wesley the man advantage. They’d make use of it, scoring a try in the left corner in the red to set up the pressure kick.

Sadly, it was not to be for Ian Cassidy. His kick ebbed wide, meaning this one finished 36-37.