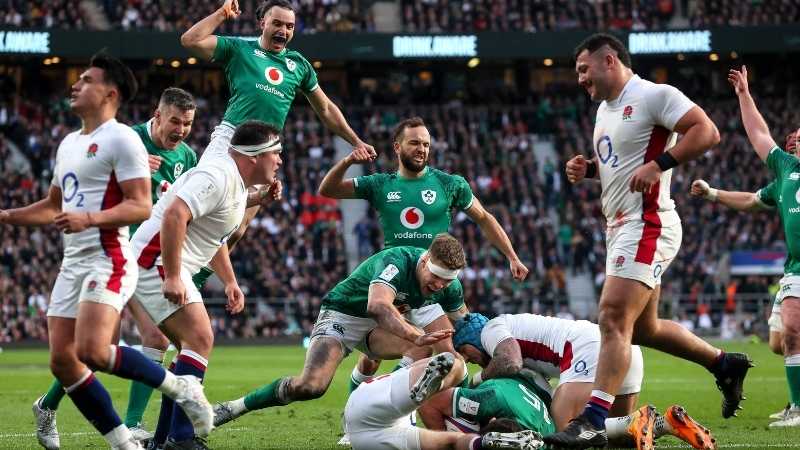 Ireland showed sheer grit and determination to overcome a hard hitting, 14-man English side to beat them 32-15 at Twickenham today.

With under 90 seconds on the clock, England were dealt a huge blow when second row Charlie Ewels was sent off for a high tackle on his opposite number James Ryan which silenced the Twickenham crowd.

Johnny Sexton scored from the resulting penalty to give Andy Farrell’s side an early advantage.

The Wicklow native popped the ball into the path of James Lowe who raced over the line to give Ireland an 8-0 lead inside the first six minutes.

After the try, England did find some joy especially from set pieces with their scrum proving too strong for the Irish at numerous occasions.

Marcus Smith scored his side’s first points of the game on the 18th minute mark to make it a five-point game.

Smith decreased Ireland’s lead again with a well struck penalty from the Ireland 10m line with just under ten minutes remaining in the half.

Ireland went down the other end immediately and some quick thinking from Jamison Gibson Park resulted in Ireland’s second try of the first period.

The Leinster scrum half tapped quickly from a penalty on the England five-metre line before finding Hugo Keenan. Keenan dove over the line and Johnny Sexton converted to make it a nine-point game heading into the final moments.

Ireland struggled with their discipline at the breakdown and this time it was Iain Henderson who was penalised inside his own 22. Smith followed up with his third penalty of the afternoon to make the scores 15-9 at half time.

England came out like a team possessed for the second period and after Ireland failed to score from a lengthy attack inside the English 22, the home faithful began to boost their side.

Midway through the half, Marcus Smith added his fourth penalty of the game to make it a three-point game yet again.

Smith levelled the game just moments later with another penalty after more poor discipline from the visitors.

Ireland came agonisingly close to a second half try when replacement Rob Herring looked to have had the ball grounded on the try line.

The referee adjudged the ball to be held up and brought play back to a previous penalty awarded to Ireland.

Sexton calmly slotted the ball between the posts to restore Ireland’s lead.

Jack Conan sealed the win for Ireland with eight minutes remaining after phases upon phases of Irish control. Sexton followed up with the extras again from the tee.

Finlay Bealham was the man who secured Ireland’s bonus point win after scoring with his first touch of the ball after less than 60 seconds on the pitch.