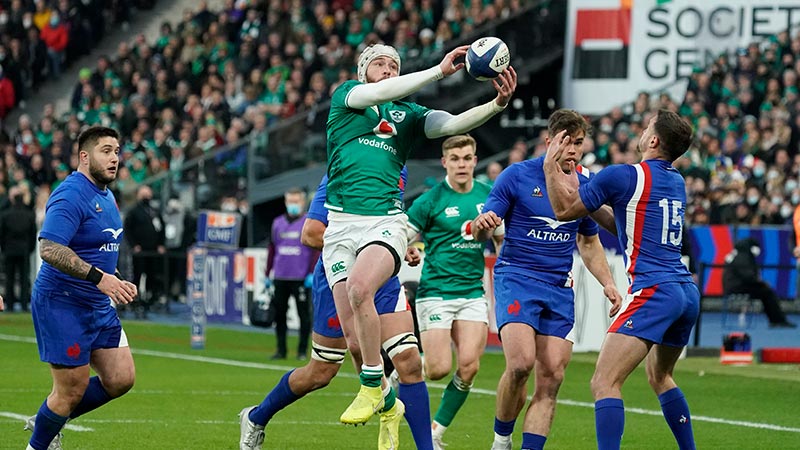 France survived a second half comeback to defeat Ireland 30-24 at the Stade de France.

Tries from Antoine Dupont and Cyril Baille as well as 20 points from the boot of Melvyn Jaminet secured a vital win for 'Les Bleus' in their quest for the 2022 Six Nations.

France got off to an emphatic start after just 70 seconds on the clock. Romain Ntamack found space inside Ireland’s 22 metre line before offloading to his half back partner and World Player of the Year Antoine Dupont who crossed for the games’ first try.

Melvyn Jaminet followed up with the conversion and a penalty minutes later to give the hosts a 10-0 advantage after just seven minutes played.

Ireland did get back into the game directly from the re start when Joey Carbery’s kick was claimed by Mack Hansen who rose above Jaminet in the air before crossing in the corner for an outstanding try.

Munster’s Joey Carbery added the extra two points from the tee to reduce the deficit.

France increased their advantage just after the quarter of an hour mark through another Melvyn Jaminet penalty.

Les Bleus’ physicality caused Ireland some trouble that they haven’t experienced in recent games and the hosts dominated the scrums during the first half.

Two further penalties from Melvyn Jaminet gave France a 19-7 lead at the interval.

Ireland came out at a ferocious pace for the second period but it was Melvyn Jaminet who found the first points of the half with a well struck penalty to increase the hosts advantage to 15 points.

Andy Farrell’s side had their efforts were rewarded after five minutes into the half. Ireland opted for a maul on the French five metre line which saw Josh Van Der Flier peel off the front of the maul and over the try line to score his side’s second try of the game.

Joey Carbery followed up with an excellent conversion from an acute angle to add the extra points.

The boys in green found their third try of the game courtesy of some quick thinking from Jamison Gibson-Park. The scrum half picked the ball of the back of a ruck inside the French 22 before racing under the posts to take the difference to just one point.

France’s replacements after the 50-minute mark took them to another level but it was starting loose head prop Cyril Baille who crossed the line next for the home side. A well worked lineout routine and some powerful ball carrying by the French forwards resulted in Baille diving over to stretch France’s lead.

Ireland was awarded a penalty just outside the French 22 with just under seven minutes remaining. The visitors opted to kick for the posts and Carbery brought France’s lead back to just three points.

Fabien Galthie’s side looked to have sealed the win when full back Melvyn Jaminet dived over the line but a brilliant Dan Sheehan tackle and some amazing strength from the Leinster hooker saw Ireland hold the ball up and survive another French try.

The referee brought the play back to a previous penalty for France in which the reliable Jaminet secured the win for the hosts.