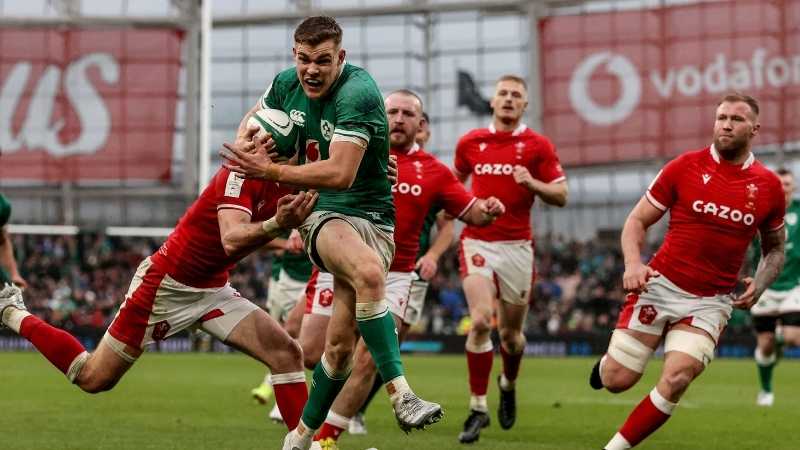 Ireland got their Six Nations campaign off to an ideal start with a 29-7 win over Wales at the Aviva Stadium.

The hosts started the game at a higher pace than their opponents and looked to use their width immediately from the off.

Mack Hansen’s first involvement in an Irish jersey proved to be a useful one. The Connacht man raced from his own half before chipping the ball over Louis Rees-Zammit. The Australian born winger wasn’t able to get on the end of his kick but did make sure his side had the throw into the lineout on the Welsh five metre line.

Ireland recycled the ball well and after a couple of phases of possession, Sexton spread the ball wide to Mack Hansen. Hansen drew the Welsh defence infield before offloading to his fellow Connacht man Bundee Aki who finished in the corner after just over two minutes on the clock.

Jonathan Sexton followed up with the conversion to give them an early, seven-point advantage.

Ireland continued to dominate both territory and possession while causing the Welsh defence serious trouble at the breakdown with Jack Conan and Andrew Porter completing some excellent turnovers.

The hosts were awarded two penalties inside the Wales half, but Sexton missed both attempts much to the surprise of the packed Aviva Stadium crowd.

Sexton did add a further three points midway through the half to extend his side’s advantage. Ireland lead 10-0 at the break.

The hosts began their second half in the same fashion as they started the first. Johnny Sexton opted to go to the corner from a penalty where his pack used their effective maul to mount pressure on Wales.

Jonathan Sexton spread the ball wide to the awaiting Andrew Conway who dived over in the corner for his side’s second try of the afternoon.

Sexton showed his composure with the follow up conversion to add the extra two points to Ireland’s tally.

Wales’ Josh Adams was sent to the bin for a shoulder into the face of the Ireland captain. From here Wales struggled to maintain the ferocious Irish attacks.

Josh Van Der Flier’s line break opened up the Welsh defence once again and after Ireland recycled the ball through carries from James Ryan and Caelin Dorris. Gibson Park passed the ball out to Andrew Conway again who scored his second try in the space of eight minutes. It was the Munster man’s 15th try in just 28 caps for his country.

Ireland sealed their bonus point on the hour mark when Andrew Porter ripped the ball from Gareth Thomas.

Sexton passed the ball wide towards the right wing again where Mack Hansen popped the ball into the path of Bundee Aki who offloaded to Garry Ringrose, who danced through Liam Williams’ attempted tackle to secure the all-important bonus point.

With under five minutes remaining, Wales did find their only score of the game when Taine Basham capitalised on a mistake by Tadgh Beirne. The Dragons’ flanker dived underneath the posts before Callum Sheedy added the extra two points.

Ireland travel to Paris next weekend to face the tournament favourites at the Stade de France.