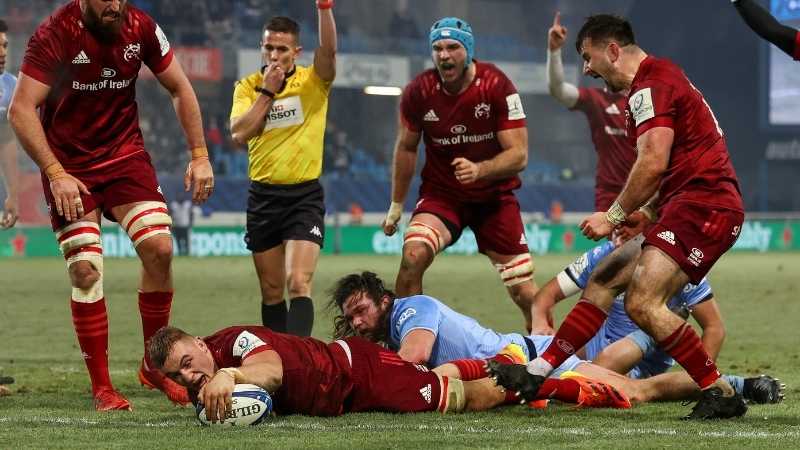 Gavin Coombes’ 78th minute try proved to be the difference as Munster edged Castres 16-13 at Stade Pierre-Fabre in the Champions Cup.

In a low scoring affair in France, Thomas Larregain’s first half try looked to be decisive as both teams struggled to handle the ball in what was a scrappy affair; before Coombes’ heroics at the death sealed a vital victory for Johann Van Graan’s team.

Munster struggled throughout the evening in France, but looked set to rue the decision to not kick for three with nine minutes remaining, until Coombes spared their blushes.

Van Graan’s men picked up a crucial victory to keep pace with Harlequins in Pool B, inside a stadium that the hosts hadn’t lost in this season. However, Castres struggled to execute throughout the game, which saw five lead changes.

Munster came crashing out of the gates as young Jack Crowley slotted over an early penalty to give the visitors an early 0-3 lead.

However, the hosts responded emphatically as Larregain pounced on a delightful chip kick from Ben Botica to give Castres a 7-3 lead at the break.

The visitors bounced back strongly to begin the second-half as Crowley slotted over two quickfire penalties to give Munster a slender 7-9 lead early in the second half.

Castres responded strongly to reclaim the lead for a second time as Botica slotted over a penalty of his own to give the hosts a 10-9 lead. With the game firmly poised Rory Kockett attempted and missed a long range field goal attempt minutes later, leaving the deficit at just one point.

Munster’s lack of discipline proved to be to their detriment and came back to haunt them as Botica stretched the hosts’ lead to four points with 14 minutes remaining.

All hope looked to have evaporated for Munster as they were made to rue opting against a shot at goal following a bobbled lineout inside the 22.

However, Munster’s blushes were soon spared as Coombes crashed over from range at the death to send the visiting fans home with a smile.