Ireland ease to victory in Rome 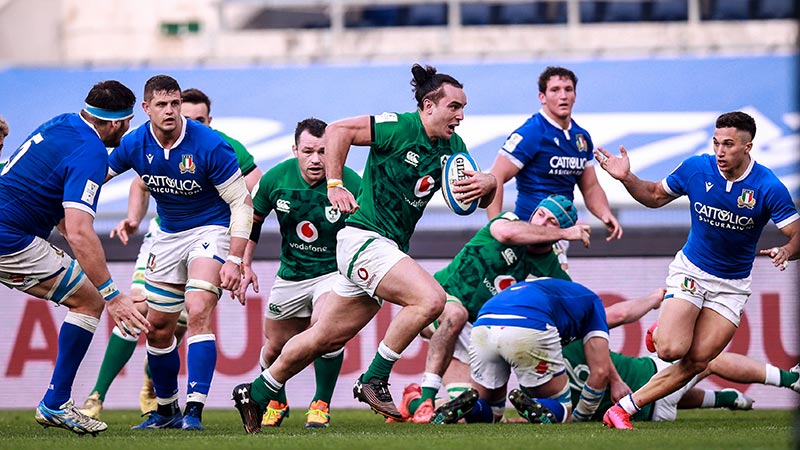 Ireland have beaten Italy 48-10 in Rome today to get their Six Nations campaign up and running in their third outing of this year's championship.

The win was expected and won't tell a lot about where Ireland are at under Farrell. Ireland's record before today against Italy was a good one. The had totalled 45 touchdowns in their last seven encounters before today.

The Irish had lost the previous two fixtures to Wales and France and were looking to make amends against the Azzuri.

Italy started brightly in the opening few minutes. Ireland gave away two penalties within the first 2 minutes. The Irish front row were again guilty of not rolling away. The Italians were awarded a penalty Paolo Garbisi scored the opening penalty to give the Italians an early lead in Rome.

Ireland quickly responded when the Irish were awarded a penalty of their own. Johnny Sexton made no mistake to make it 3-3 with 6 minutes gone.

The Italians failed to release at the breakdown allowing Sexton to punt the ball high into Italian territory. Ireland thought they had a try when they had the line at their mercy after good play by Ian Henderson. Ireland felt they had earned a score but the referee denied their claim after a referral to Roman Poitit, the TMO.

Gary Ringrose would make sure there was no dispute moments later when he received a pass from James-Gibson-Park. The winger ploughed through to the tryline and Sexton converted to make it 10-3 with 10 minutes on the clock.

Johnny Sexton was a busy man in the opening 15 minutes and it was his straight forward conversion from a penalty to make it 3-13 to the away side.

Ireland sustained brief Italian pressure and would make it two tries on the half hour.  Sexton put Larmour into some space who found try scorer Ringrose. Ringrose's offload found full-back Hugo Kennan who showed good pace to make the line to to make it 3-18. Sexton would make no mistake in front of the posts.

Ireland's lineout inside the Italy 22 was excellent and it was another moment of beauty from Sexton to Larmour that allowed Ireland to score their 3rd try five minutes later. Jordan Larmour found Will Connors on the left flank for the Leinster man to make it 25-3.

Italy would give Ireland something to think about when Garbisi darted between two defenders before flicking a delightful offload to Johan Meyer who powered through Larmour to score score Italy's first try of the game to leave a seventeen point margin at the interval.

Ireland got the second half off with a tremendous start with their 4th try and bonus point when Gibson-Park at the back of Ireland's lineout maul found Furlong who blasted towards the Italian line. CJ Stander finished the move by touching the ball down. Sexton added the conversion to stretch the scoreline.

Italy's lack of discipline cost them all game and it was prop Giosue Zilocchi who was sent to the sin bin for using his hands in the ruck. In the next attack Stander picked up and burrowed over from close range, but the try was disallowed for a clear knock on by hooker Kelleher.

Italy next lost captain Bigi to the sinbin due to number of infringements which left the Italians with 13 men and Ireland would make the deficit count when Connors got his second try of the game after a successful maul.

Ireland smelt blood and it was nearly James Lowe who would rub further salt into Italian wounds minutes later but for a forward pass call by the referee leaving the winger disappointed.

Ireland saw out the game with ease in a comfortable afternoon for Andy Farrell's side. Keith Earls would add insult to injury with the last kick of the game to make it 48-10. The Irish go to Murrayfield in two weeks to play Scotland. That will be a bigger test.