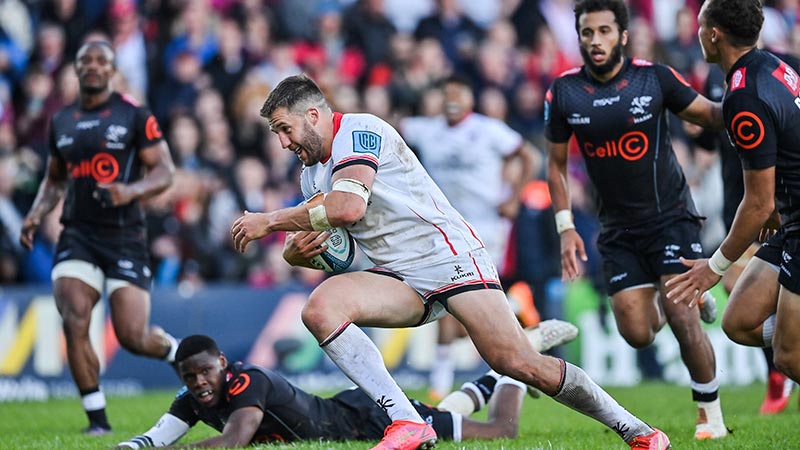 Ulster guaranteed themselves a home quarter-final as they edged the Sharks 24-21 at Kingspan Stadium in the United Rugby Championship.

The hosts looked to be coasting to a win, as they carried a 24-7 lead into the last five minutes of the game, but late converted tries from Marius Louw and Grant Williams made Ulster sweat as the Sharks threatened to pull off a remarkable comeback. The hosts held on though to take a valuable win at home.

Tries from Mike Lowry, Stuart McCloskey and James Hume proved to be enough for Ulster, as Dan McFarland’s men wrapped up a home quarter-final in two weeks time.

Despite giving up two late tries, McFarland’s men will be pleased with their defensive effort against the Sharks, who came into the game after scoring 157 points in their last four games. Ulster kept the visitors scoreless for over 60 minutes and looked to be the better side by some distance for most of the contest.

However, the win came at a price as Ulster lost Michael Lowry to a head injury at the end of the first half. McFarland will be nervously waiting for news on the full-back’s health over the next two weeks.

Nerves were evident from the outset in Belfast as playoff seedings were at stake at Kingspan Stadium. After winning their last four, the Sharks came in knowing a win would earn them a home quarter-final and possibly a home semi-final, whilst Ulster were looking to avoid falling as low as seventh place in the table.

Nevertheless, Ulster seemingly settled first as John Cooney slotted over a penalty to give the hosts an early lead.

The hosts soon had their first try of the game as Ethan McIlroy cut inside the Sharks defence and released Mike Lowry for the opening score to give the hosts the lead at the break.

Ulster started the second period impressively as McCloskey powered through two tackles to race in to send McFarland’s team into a 17-0 lead.

The Sharks looked for an emphatic response and threw caution to the wind in the hopes of sparking a comeback, but Ulster defended valiantly as they kept them bay for over an hour.

However, the resistance eventually broke as replacement loose-head Ntuthuko Mchunu powered over from close range. Curwin Bosch converted to make it 17-7.

Ulster’s response was immediate as Hume raced in for the province’s third try of the afternoon to stretch the lead out to 17 points.

The hosts looked to be easing to victory and a home quarter-final, but the South Africans refused to throw in the towel as the speedy Grant Williams broke through the line and released Louw for a quick try.

The duo linked up for a second time moments later as Louw pounced on Williams’ box kick, before releasing the speedy half-back for a try. Ulster held on for a slender 24-21 win, with the Sharks potentially waiting in the quarters.