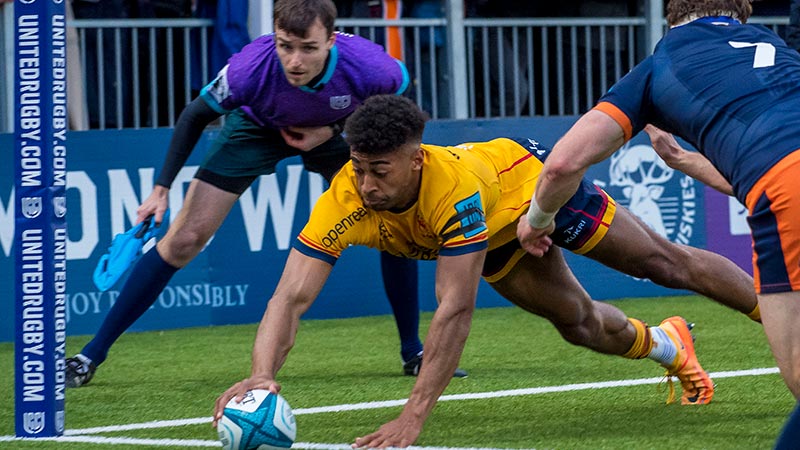 Ulster boosted their hopes of a finishing in a home quarter finals position in the URC with a tightly contested 16-10 win away to Edinburgh.

Robert Baloucoune’s first half try along with three Nathan Doak penalties had Ulster 13-3 up at half time, but Mark Bennett’s try on 68 minutes made it a nervy finish. Edinburgh pummelled the Ulster try line in dramatically tense closing stages, but the visitors held out for a crucial win.

Seeking to bounce back from the error-strewn defeat to Munster, Ulster began well. Despite an early yellow card for flanker Nick Timoney, it was in fact Edinburgh who fell behind. Ulster patiently built the phases and eventually Stewart Moore, on as an early substitute, played in winger Robert Baloucoune to score in the corner. Nathan Doak converted superbly and Ulster, despite being a man down and having little territory, were 7-0 ahead.

Doak slotted two more penalties in a scrappy first half disrupted by several early injuries and Ulster led 13-0. A penalty from Emiliano Boffelli in the last kick of the half, gave Edinburgh their first points of the match but the Belfast province led 13-3 at the break.

The second half saw Doak extend the lead to 16-3 before Alan O’Connor, an earlier replacement for Ian Henderson, was sin binned. Ironically, after Ulster had been restored to 15 men, was when Edinburgh scored, the in-form Mark Bennett dotting down.

That made it 16-10 and with 12 minutes to go, a suddenly tense conclusion loomed. But a combination of Edinburgh bluntness, some outstanding tackles and resolute defending all over allowed Ulster to secure the victory.

Dan McFarland will hope this resilience is a building block on which a home place in the URC playoffs can be secured. Edinburgh’s home hopes, meanwhile, have taken been severely wounded.