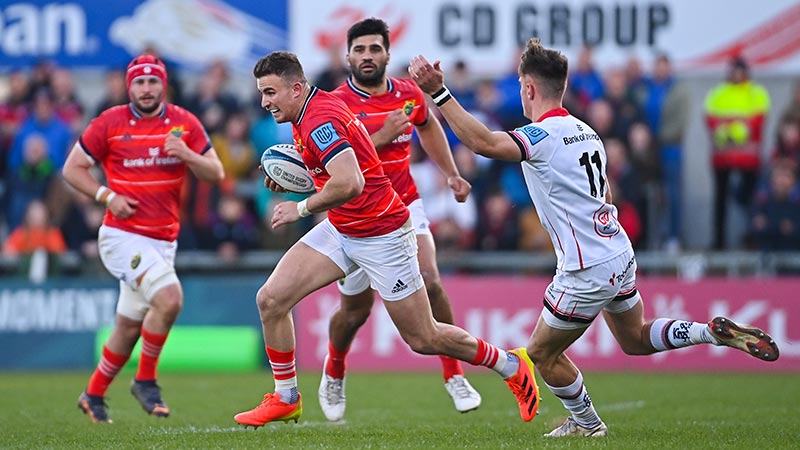 14 points from the boot of Joey Carbery powered Munster to a crucial 17-24 against Ulster at Kingspan Stadium in the United Rugby Championship.

The win sees the visitors earn a crucial win in the race for a home quarter-final in the United Rugby Championship playoffs, and sees Munster move into third place ahead Ulster on points difference.

Munster produced a superb defensive display to limit Ulster to just three first half points, and despite losing the territory battle in second half they kept Ulster to just two tries to earn their first win at Kingspan Stadium since 2017.

The win also sees Munster do the double over Dan McFarland’s team for the first time since the 2016-17 season, despite being without several players including Peter O’Mahony, Simon Zebo and Niall Scannell.

As for Ulster, they were off colour throughout the first 40 minutes as Munster took a 3-15 lead into the break. The Ulstermen fought back as they reduce the deficit to 17-21 late in the game, before Carbery iced the game with just seconds remaining on the clock.

The evening started promisingly for Ulster however, as John Cooney kicked his 793rd point in Ulster colours to give the hosts an early 3-0 lead. That proved to be Ulster’s only lead of the evening as Carbery slotted over his first of the game moments later.

Munster quickly claimed the lead as Stephen Archer crashed over from close range to make it 3-10, before Keith Earls raced in unopposed to score his 61st try in Munster colours to make it 3-15 at the break.

The visitors picked up where they left off as Carbery added his second penalty of the game to make it 3-18 early in the second half. However, Ulster threatened a fightback as Rob Herring scored his 31st try for Ulster to reduce the deficit to 10-18.

The hosts spent much of the second period inside Munster’s half, but couldn’t find a way through a determined Munster line, before Carbery made it 10-21 with his third penalty of the game.

Nevertheless, Ulster set up a thrilling conclusion as Sean Reidy powered over from close range to reduce the deficit to 17-21, before Carbery iced the game with a 79th minute penalty.