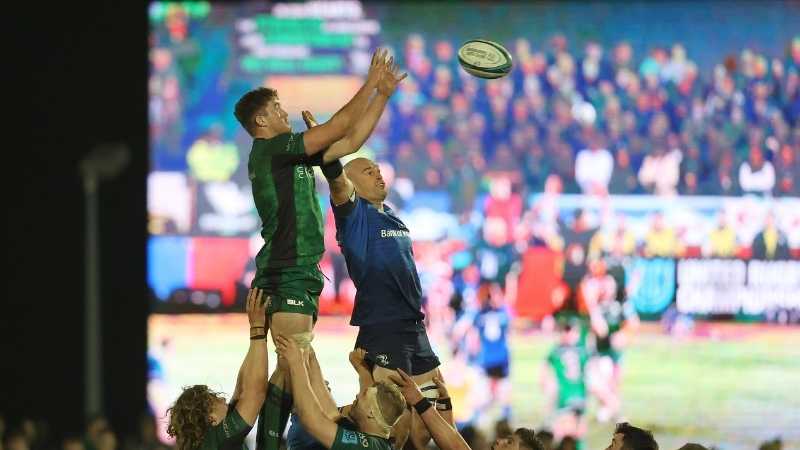 Leinster take the interprovincial bragging rights, after an emphatic 45-8 win over Connacht in this evening's URC meeting at The Sportsground.

The visitors ran in seven tries in the end as they were ruthless in attack, a red card for Connachts Tom Daly after just three minutes, causing major issues all evening.

The hosts had led 8-7 at half time, but the second half surge by Leinster sees them back at the top of the table, as they take a momentum boost into their next meetings, while Connacht are in need of a huge turn around.

After a frantic start both teams were down to 14 men after three minutes, Leinsters Tommy O’Brien shown a yellow after a dangerous tackle in the first moments of the tie, while Connachts Tom Daly was given a straight red for a high tackle to the head of Ciaran Frawley minutes later.

It was all Leinster shortly after the red card, Ross Bryne kicked in behind, they thought it was a 50-22 but Connacht had the line out, a call for a crooked throw gave Leinster a chance close to the line, but in the end they had to kick for touch after a penalty at the scrum.

Straight from the lineout Rory O’Loughlin made use of the man advantage, crossing for Leinsters opening try in the 14th minute, after Connacht couldn’t hold out much longer defensively they pounced out wide to cross, Bryne landed the conversion for a 7-0 lead.

Jack Carty managed to put Connacht on the board after 22 minutes, he landed a long range penalty to steady the nerves after a frantic opening to the interpro.

After the penalty Connacht started to find their feet with their supporters finding their voice, they ran good phases of play toward the Leinster 10 and 22 metre lines but failed to create the chances to warrant scores.

Toward the end of an action packed half Connacht were awarded a penalty in front of the posts, they opted for a scrum and after running the phases Carty offloaded a lovely pass wide for Tiernan O’Halloran to cross, making it 8-7 at the break for the hosts

After the restart Leinster started strongly with Frawley back on after a HIA, they looked to come back into the game as they still had a numerical advantage. They worked the phases well early but failed to create the chances.

David Hawkshaw was a late substitute in the opening half for Byrne, he made an impact after 53 minutes as he burst through to cross over, he converted his own try for a 14-8 lead.

Just two minutes later the Leinster charge continued, after Connacht were dispossessed mounting an attack, Luke McGrath was the man to get in behind for their third try, Hawkshaw landed the extras for a 21-8 advantage.

The fatigue levels started to show on the Connacht outfit, a kick in behind by Hawkshaw looked to be gathered by John Porch but he misjudged the bounce of the kick, with Frawley on hand to touchdown for the bonus point, 26-8 after 65 minutes with Leinster well on top.

The night got worse for the hosts in the 68th minute, Frawley adding their fifth try of the contest, another blitzing run down the wing by the centre, as no challenge was in his way to make it a 31-8 scoreline.

It was all the visiting outfit in the end, Max Deegan added the sixth try powering over from the ruck, before Tommy O’Brien drove down the left wing to cross for the seventh, an emphatic showing by a dominant Leinster.