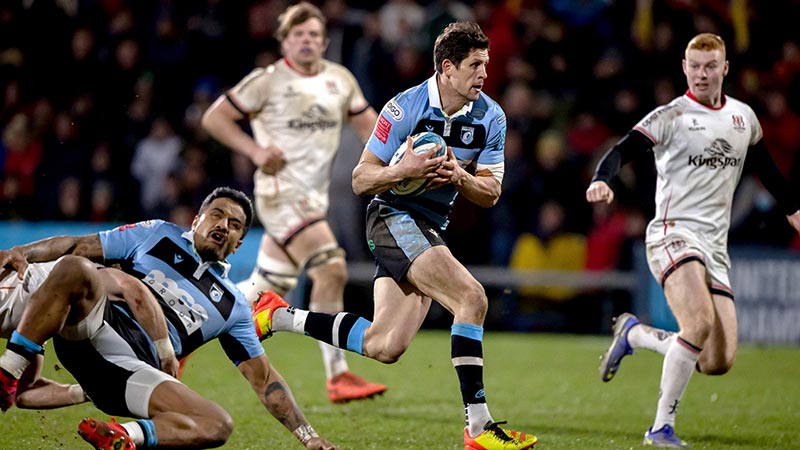 The hosts scored seven tries, and all but secured the win at the break as they took a 22-0 lead into the sheds. Kirby Myhill’s try after the break gave the visitors hope, but that was as good as it got as Ulster added 26 unanswered points.

It was one-sided from the outset as Dai Young’s team struggled to deal with the pace and power of the Ulsterman, with the driving maul a particular area of dominance for the hosts. The visitors will also be concerned about the injury sustained by fly-half Jarrod Evans.

Dan McFarland will also be delighted that talisman Iain Henderson came through unscathed on his return to action, and the province overtook Leinster at the top of the United Rugby Championship.

The result was never in question as Balcouane raced in after seven minutes to give the hosts a quick 7-0 lead. It wasn’t before McFarland’s men added to that as Nathan Doak slotted over a penalty.

Cardiff looked to find a response and found themselves deep in Ulster’s 22, but saw Rey Lee-Lo throw an intercepted pass to Tom Hume, who raced in unopposed to increase the lead to 17-0.

All hope soon quickly evaporated for Dai Young’s team as Stuart McCloskey crashed over from close range to send Ulster into halftime with a comfortable 22-0 advantage.

Cardiff cut into the deficit just after the break as Kirby Myhill found the whitewash, but that was quickly undone as Nick Timoney broke through a number of weak tackles to add Ulster’s fourth minutes later.

The hosts were relentless though as Balcouane added his second try of the game before an intricate bit of play between McCloskey and Stewart Moore released replacement Aaron Sexton out wide to walk in for Ulster’s sixth.

Ulster added a seventh moments later as Tom Stewart crashed over from a driving maul to make it 48-5. However, Cardiff added a consolation through James Ratti to give the visiting fans something to smile about after a difficult evening in Belfast.