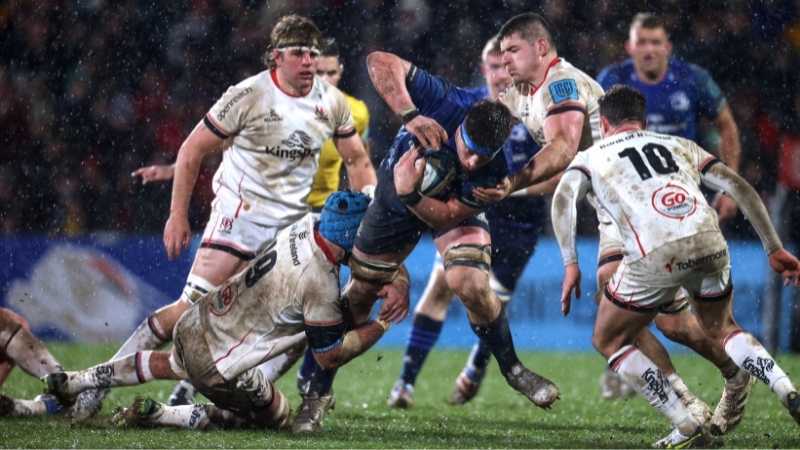 Ulster edged a shorthanded Leinster side 18-13 in a defensive slugfest in the URC at Kingspan Stadium tonight.

Tries from Sam Carter and Michael Lowry proved to be the difference as Ulster survived a dog fight in what was a difficult evening in Belfast conditions wise.

The win means Ulster have done the double on Leinster for the first time since 2013, and have made it nine wins from nine at Kingspan Stadium in the URC this season.

The win means Ulster followed up on their 10-20 win away at Leinster in November to claim the double over Leinster for the first time since 2013. While the hosts' dominance at Kingspan Stadium continues as Dan McFarland’s men made it nine wins from nine at home in the URC this season.

Leinster entered the game without a number of Irish internationals including the likes of Johnny Sexton, Caelan Doris, Hugo Keenan, James Ryan and Garry Ringrose. However, their task was made much harder as starting loosehead Ed Byrne was forced to pull out of the squad before kickoff.

The visitors came out of the blocks slowly as Carter crashed over after eight minutes to give Ulster a quick 7-0 lead, following Nathan Doak’s conversion.

However, Leo Cullen’s men responded emphatically as Ross Byrne slotted over a penalty to reduce the deficit to four points before Max Deegan crashed over to give Leinster a three point lead minutes later.

Ulster bounced back quickly as Doak quickly levelled the scores with his first penalty of the game before Michael Lowry produced a moment of brilliance to send the crowd at Kingspan Stadium wild.

Lowry, who could consider himself unfortunate to be dropped from the Ireland squad produced a moment of brilliance as he claimed a pass from Robert Baloucoune to race in for Ulster’s second score of the game.

The full back’s try made it 15-10, but the hosts crucially added a further three points from the boot of Doak just before the break to give Ulster a comfortable 18-10 lead at half-time.

The visitors ate into that deficit immediately as Ross Byrne added his second penalty of the day to reduce it to five points.

Leinster looked to be in as they quickly shifted the ball out wide to Tommy O’Brien, but a last ditch Baloucoune tackle spared Ulster’s blushes