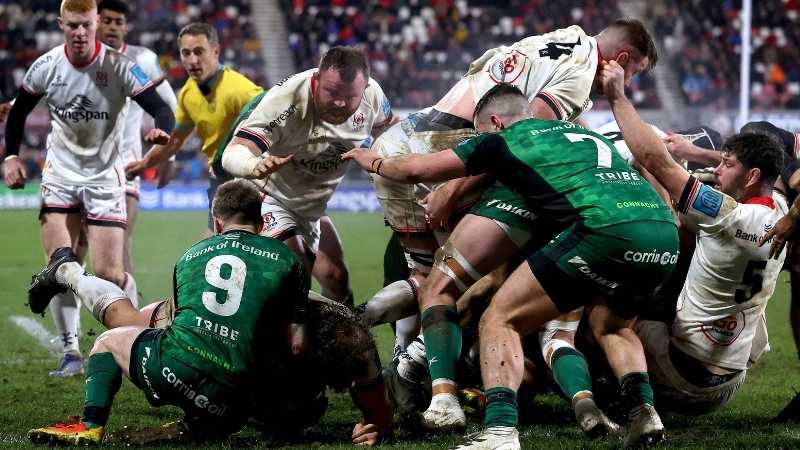 Ulster made it four wins in a row in all competitions, after a 32-12 bonus point win over Interpro rivals Connacht at Kingspan Stadium this evening.

Tries from Greg Jones, Declan Moore and a brace by Robert Baloucoune, helped the Ulster club to a 20-point winning margin on the night.

Connacht suffered another tough defeat after the Glasgow game last weekend, they put in a spirited performance but could not break down the Ulster backline.

Connacht were dealt a blow early on in the tie, winger Peter O’Sullivan shown a yellow card for a high tackle into the head of Mike Lowry.

Lowry was almost the architect behind two Ulster tries before the end of the opening quarter, he glided past the Connacht defence offloading to Ethan McIlroy who sprinted for the line, but was stopped just short of the line and the offload eluded the fullback.

The second attempt warranted a score, McIlroy this time turned provider collecting a box kick and offloading for Lowry, he sprinted straight through the defence caught shy of the line, he offloaded to Jones who crossed in the corner, Nathan Doak landed a phenomenal conversion utilising all the space at Kingspan Stadium, to make it a 7-0 lead.

Ulster’s most lethal weapon has been their maul this season, they utilised it well again after 21 minutes, Declan Moore a late addition popping up to cross and score, Doak making it a 14-0 lead with another perfect conversion.

Despite being up against it for almost 25 minutes, Connacht responded with a well taken try of their own, Oran McNulty an early change from the bench powering his way past the Ulster challenge on the try line, no additional points added from the Conor Fitzgerald conversion kept the hosts nine points ahead.

Both teams tried to break the other down for the remainder of the half, in the end the sheer pace of Baloucoune gave the hosts their third try a minute into injury time, the winger sprinting unchallenged down the wing after a great pass by Lowry, Doak continued his record from the tee making it a third consecutive conversion, they led 21-5 at half time.

The Westerners started brighter after the restart, Alex Wotton crossing for a converted try six minutes into the second half, making it a nine point game with the visitors looking to make an early statement in the half.

Doak settled the home supporters nerves with a penalty 13 minutes into the half, their first score coming from the tee, the close range kick opted for the posts ahead of touch due to the pressure applied by the western province.

For the remainder of the half the game remained a tight affair, with both teams looking to add to the scoreboard, Connacht came close but failed to kick the door down to the try line, but in injury time Baloucoune got his second try after a fantastic cross field kick by Billy Burns, spotted him free near the sideline to run through and score.