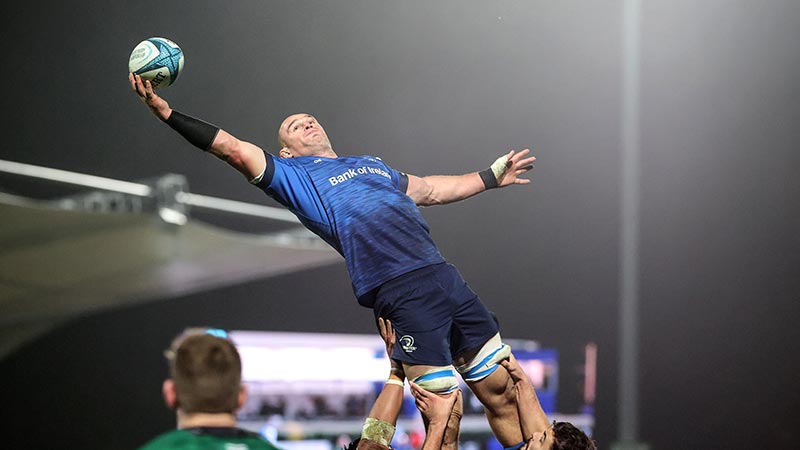 Leinster secured a valuable 47-19 bonus point victory over Connacht at the RDS tonight. Andy Friend’s side started the game at a high tempo but the hosts grew back into the affair to seal the victory and send Leinster five clear at the summit of the United Rugby Championship.

Connacht started the affair off at an emphatic pace and Leinster were sloppy in possession early on. The visitors took a well-deserved lead when Jack Carty’s inch perfect, cross field kick found the on rushing Mack Hansen who out leaped Jordan Larmour to open the scoring.

Rhys Ruddock replied for Leinster ten minutes later with a powerful try from close range followed by Harry Byrne’s conversion to give the hosts the advantage.

Connacht didn’t lay off, playing some fantastic, free flowing rugby and were rewarded with a try from centre Sam Arnold. Arnold burst through the defence from five metres out to dive under the posts and regain the lead.

Leinster did find their second try of the evening courtesy of Josh Van Der Flier who started the move with a brilliant line break before offloading to Alaalatoa who played Garry Ringrose over the line, to give Leo Cullen’s side a narrow lead.

On the cusp of half time, a moment of individual brilliance from hooker Dan Sheehan increased their advantage. Sheehan sidestepped past Hansen before diving over the line to give Leinster a 19-12 lead at the break.

Leinster came out firing at the second period and it was the link up from their back three that combined to secure Leinster’s bonus point try. James Lowe played the ball to Hugo Keenan who offloaded to Jordan Larmour to score in the corner.

Just over five minutes later, Caelan Dorris drove over from close range to give Leinster their fifth try of the evening. Dorris and fellow back row Josh Van Der Flier were excellent throughout the 80 minutes and second row Ryan Baird acted like an extra back row for the entire game.

The young second row was excellent at the breakdown and covered a huge amount of ground during the clash. Baird’s hard work was rewarded when he scored Leinster’s next try, showing huge strength and determination to squeeze through the Connacht defence.

The westerners did find their third and final try of the game courtesy of a brilliant piece of individual work from the ever-lively Mack Hansen. Hansen broke through the defence before offloading to Conor Oliver who dove between the posts to reduce the deficit.

Leinster added the icing on the cake when Garry Ringrose broke through the Connacht defence line before offloading to Nick McCarthy on the Connacht 22. McCarthy found Max Deegan who raced over the try line to seal an emphatic win for Leinster.