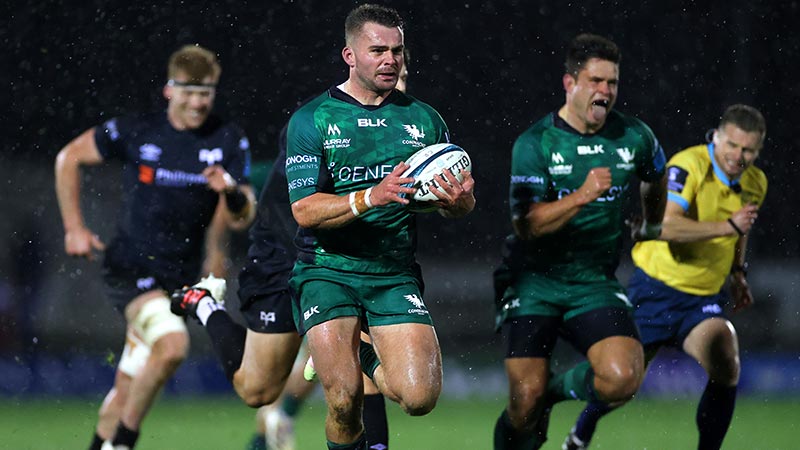 Tries by Mack Hansen, Shayne Bolton, Oran McNulty, Sam Arnold, Caolin Blade and a Conor Fitzgerald helped Connacht to a 46-18 victory over the Ospreys, in a wet and windy Sportsground this evening, they notched seven tries in the end.

The Westerners battled hard for their victory, well used to the weather conditions at the Galway venue, a horrible evening for both kickers, the wind making the sharpshooter struggle to make the target, while greasy ball conditions made handling and simple movements a treacherous ordeal.

A miserable night of weather conditions but the result certainly sent the supporters home happy, the Irish province weathering to storm to take the maximum points, securing back to back victories and their first over Welsh opposition this season.

From the start they looked stronger, Mack Hansen bundling over in the opening two minutes, Hansen starting the attack off with some great defence, the turnover getting through the phases before Jack Carty spotted him free on the other touch line, the big man side stepping in to score to make it 5-0

Stephen Myler reduced the deficit in the 10th minute, his penalty finding the target despite the goal posts swaying in the process. Carty landed a three pointer of his own to push their lead back to five midway into the first quarter, 8-3.

On his debut for the province South African Shayne Bolton scored his first try in green, he got on the end of a Hansen offload from yet another well worked attack to add the second, again the conversion failed 13-3 after 14 minutes played

Luke Morgan crossed for the Ospreys opening try in the 18th minute, but his effort was immediately cancelled out by Oran McNulty who got their third try of the evening in the 22nd minute, making it 18-8 to the Westerners. Myler added another penalty to reduce the gap to seven at half time.

Two quick tries after the restart set the tone for the second half, Sam Arnold crossing after being held near the line for a couple of phases, the centre did enough to cross, Carty making his first conversion attempt of the evening. Joe Hawkins added a second for Ospreys minutes later, almost from nothing he glided past the defence to cross under the posts, 25-18.

The end of the half was dominated by the home province, a penalty try was awarded near the hour mark for a high tackle on substitute Peter Robb, as Luke Morgan was sent to the sin bin, with two further tries added in the final ten minutes of the half, Caolin Blade and Conor Fitzgerald finishing the night off, as Carty added both conversions.