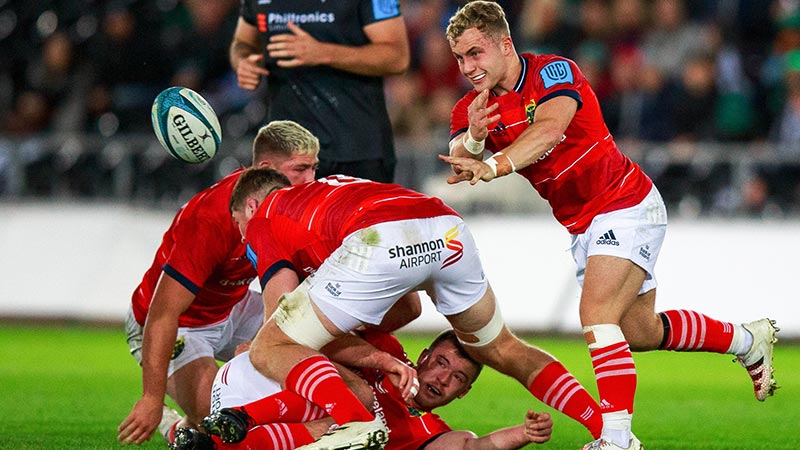 Ospreys took full advantage of Munster's poor discipline, as Stephen Meyler kicked six perfect penalties, as they overcame the Irish side 18-10 at the Swansea.com Stadium.

The overhanging narrative all game was Meyler kicking from the tee, the only scoring output for the Welsh outfit, as Munster were penalised for their issues in the scrum, along with other basic errors.

Craig Casey crosses for The Munstermen’s only try of the evening, ending a gap of 50 minutes without a score in the process.

Straight from the off Munster were penalised for not releasing the ball, as Meyler landed his first penalty in the opening minute. On his first start for the province, Jack Crowley levelled with a three-pointer, as five minutes elapsed on the clock.

Niall Scannell crossed over for an early try for the Irish outfit, but it was ruled out by the TMO, John Ryan was penalised for obstruction in the build up, as they finished the opening quarter on the back foot.

Shortly after the half hour mark, Munster were penalised for an off the feet tackle, Meyler again made no mistake to pull out a three point lead, 6-3. Meyler added another kick just four minutes later, as they were ahead 9-6 at the break.

Just five minutes after the restart, Meyler kicked his fourth penalty, the fly half had his radar working, as the Irish province were again guilty of ill discipline, as Meyler made it a two score game 12-3

The Munstermen struggled for the majority of the tie in attack, Craig Casey got their opening try in the 54th minute, with Crowley added the conversion to close the gap to two points, 12-10.

The Swansea outfit remained on top, putting the pressure on the Irish side, and forcing them to make constant errors, with Meyler adding yet another close range penalty to make it 15-10.

It would not click for the Limerick outfit all night, they struggled in all areas of the pitch, while Meyler had an evening to remember, as he made it six from six, as he kicked another penalty to penalise Munsters poor discipline.

Ben Healy had two attempts in front of the posts in the final two minutes, the kicker looking to secure a losing bonus point, both kicks coming from 50 plus metres out, but both efforts went to the left and wide, as they failed to secure any points.