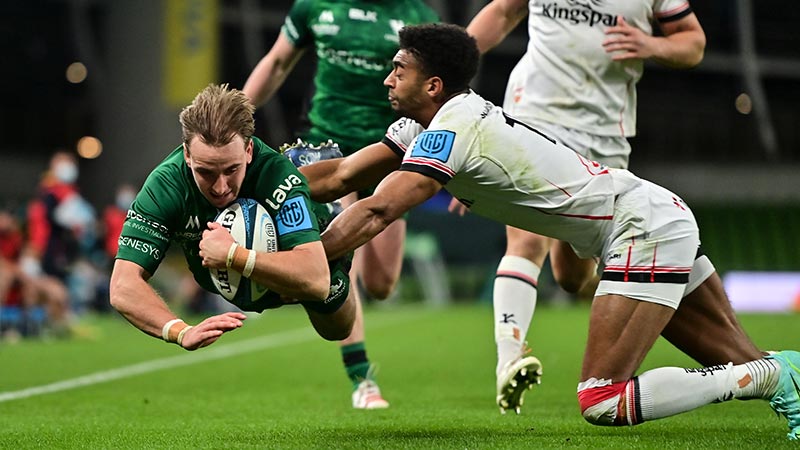 Connacht got a well deserved bonus point victory , over Ulster in tonight’s Round 5 meeting, in the United Rugby Championship, coming out 36-11 winners this evening.

An impressive performance by the Western Province, after their disappointment last weekend, they made sure to leave a mark today, and do so by taking the full points.

Tries by Niall Murray, Mack Hansen, John Porch and Diarmuid Kilgallen; along with a super second effort from Hansen late on; guided them to victory this evening.

Despite the final result, it was Ulster who took an early lead with six minutes played, the impressive Nathan Doak adding a penalty, Connacht did well just beforehand to turnover possession, but were penalised for a late tackle and Ulster took an easy kick in front of the posts.

Connacht crossed for their opening try, just 12 minutes in, Ulster were carved open and Niall Murray saw a gap and sprinted for the line, as Jack Carty made it the full seven points. Doak brought it back to 7-6, just minutes later as the referee awarded a penalty for an offside.

The Westerners were commanding the game, putting pressure on the Ulster line, and as they were looking to stop an attack, Mack Hansen got Connacht's second try, as he stole possession and had acres in front of him to cross the line, Carty making it 14-6. Carty increased the lead minutes later to 17-6, he slotted over a penalty.

Things started to get worse for Ulster after the half-hour mark, Doak had another attempt at the posts, but he drifted the kick to the left and wide.

Alan O’Connor then went to the sin bin, as he hit Dave Heffernan with a shoulder into the back, in an off the hall incident.

Minutes later it was 14-all, as Ultan Dillane became the next player to go to the sin-bin, the referee not happy with the level of ill discipline, as the Kerry man was offside.

Leading 17-6 at the break, Ulster were again guilty of an illegal challenge, Carty pointed to the posts from a long way out, but drifted his effort to the right and wide, an early chance for more breathing space.

Just after the hour mark the green wall pushed forward, and crossed for try number three, John Porch crossing in the corner, the attack spray the ball out wide and Conor Fitzgerald makes a good pass for Porch to cross, but Carty missed the extras, as they extended the gap to 22-6.

The Ulstermen looked shaky in defence all night, and with 65 minutes on the clock the bonus point was secured, yet another steal in possession allowed Diarmuid Kilgallen to run unfazed to the line, Carty adding an easy conversion to pull out a 29-6 advantage.

A poor night in truth for the Northerners, looking poor in attack, they finally managed to get over the line in the 68th minute, they drove a maul from a five-metre lineout, Bradley Roberts getting the credit to reduce the deficit to 29-11.

Mack Hansen capped off the evening with a late second try, he collected from an Ulster dispossession, and sprinted clear to the line, with Carty adding the conversion.