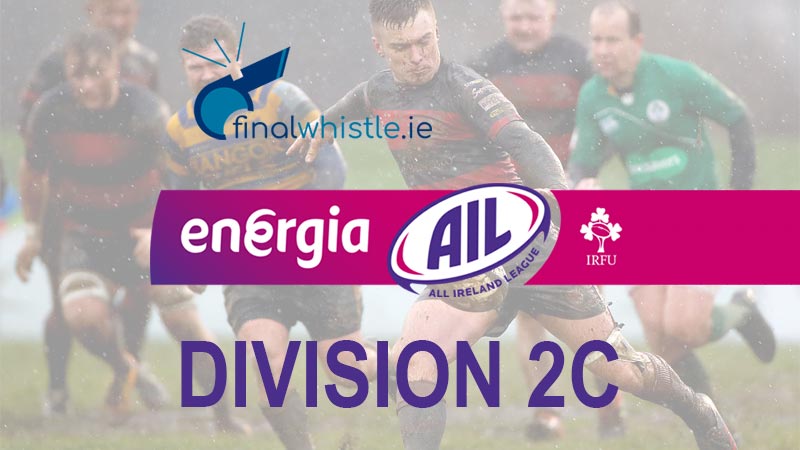 Enniscorthy pulled out a five point lead at the top of the Energia All-Ireland League Men’s Division 2C, Skerries failed to pick up a bonus point win this weekend, and now see them behind by an extra point in the race for the title.

Bangor made no mistakes this time around after suffering a hiccup last weekend, they dispatched Sundays Well earning a bonus point win in the end, as they dominated the afternoons contest.

They started strong with two early tries helping them to a 12-7 lead, after the Well crossed for a try of their own. The visitors added a penalty to reduce the gap to just two points as they started a comeback.

Declan Horrox ran from the halfway line uncontested to cross for Bangors third try of the game, this helped them into a 19-10 lead, before Conor Lusry added the bonus point with his second try of the afternoon late in the half.

Enniscorthy remain in top spot, as they continued their winning streak as they overcame Bruff this weekend. Ivan Jacob had a fantastic afternoon getting four tries in the bonus point win.

Bruff kicked an early penalty before Scorty responded with a try to lead, Bruff crossed for their own try shortly after, before Ivan Jacob added two tries after a Bruff penalty to make it 19-13 in the visitors' favour.

The Wexford men added another try before Bruff made it 26-20 with a try of their own. Arthur and Richie Dunne both added further tries to extend their lead out to 18 points, the score reading 38-20 in their favour.

Bruff got their third try late in the second half, a consolation effort which saw them suffer an 11 point defeat in the end, the result keeping them seventh in the table.

Skerries have to settle for second place in the table, victory keeping them on track but they now stil five points behind Enniscorthy. This is a massive blow to the early title favourites, the lack of a bonus point keeping the Seasiders adrift.

Derry started the brighter getting an early try to pull out a 7-0 lead, Oisín McKey reduced the deficit with a penalty, before Ross McAuley got over for their first try of the afternoon, to give them a 10-7 lead. McKey landed two more penalties before the half time whistle to see them 16-7 ahead at the interval.

Davey Goodman managed to cross in the corner for a try, McKey kicking another great conversion to extend their lead to 23-7. The hosts replied with their second try minutes later in the half, but they failed to press on and pressure Skerries in the end.

Tullamore remain in fourth spot in the league this weekend, as they defeated Clonmel but results elsewhere sees them not gain any ground in the league table.

The hosts took an early 3-0 lead with nine minutes played, a penalty seeing them punish early Tullamore ill-discipline. Tullamore responded in the 24th minute with a well taken try, the conversion missing the mark, but they pulled out a 5-3 lead. They added a second just before the half time whistle, doubling their score to 10-3 at the interval.

Clonmel were down to 14 men and the visitors made sure to punish them, but they did however kick a close range penalty to reduce the gap to four points. The Offaly club did break through for a third time minutes later, crossing for another unconverted try the final score of the game.

Omagh secured back to back wins in the division this weekend, with a seven point margin over Midleton, who have now lost two on the bounce.

The Ulstermen started the brighter, getting over for an early try to give them a 7-0 lead to keep the confidence levels high, Midleton replied with two penalties to cut the gap to just one point at the halftime break.

Into the second half it was more of the same for Omagh, they added a further two tries in a fantastic display, while the Cork club only managed a penalty and unconverted try in the second half.