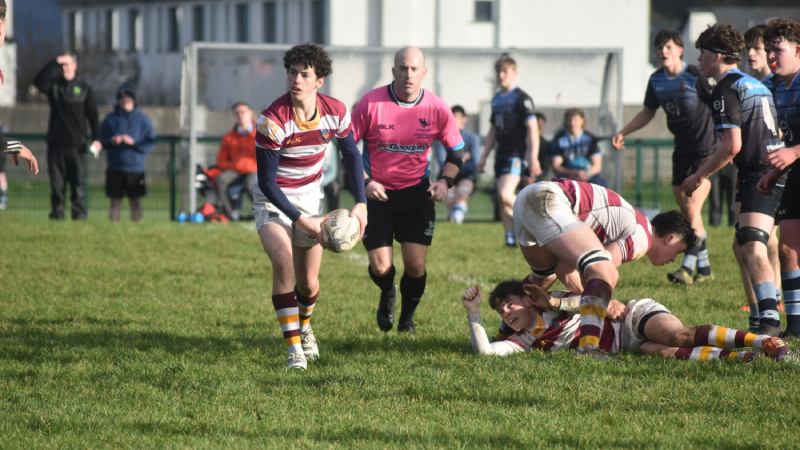 A last-gasp try Shay McGovern helped the Jes beat St. Muredach’s and qualify for the final four of the Senior Cup at the expense of their hosts this afternoon in Ballina.

The Jes took an early lead but Muredach’s lead by four at the break. The second half was cagey and an exchange of tries for either side in the final ten minutes lead to a whole host of permutations but Iognaid through McGovern scored in the last minute to take second place and break Ballina hearts and of course, Garbally who as a result of this game are also now out of the cup.

The Jes got off to the perfect start with Jack Quinn storming through to get over the line giving his side the lead and the confidence from the off with Elwood adding the extras to give Iognaid a 7-0 lead.

As the half went on the game was proving to be very even and this was reflected on the scoreboard when Billy Ruane touched down between the posts as we came up towards the end of the half. Norton made no mistake with the conversion levelling the game.

Iognaid responded almost immediately with the equalising try not proving to be a set back. Upon regaining possession earned a penalty which Callum Elwood was able to slot between the posts comfortably to give his side the lead once more.

The Ballina side looked to get back into this game before the break and some great pressure from the pack in the last play of the half saw Cian Anderson get over and give Muredach’s a lead at half time with Ruane adding the extra two with an impressive kick out by the sideline leaving his side four points up at the break.

It was a very cagey second half that felt like a real cup tie throughout. Both teams understood what was on the line and a couple of unforced errors from either side went uncapitalised.

The first score of the second half came with just ten minutes to go. The Jes retook the lead through Shay McGovern to the roar of the travelling crowd with Elwood making sure of the conversion, giving the Jes a lead of three to hold on to.

Muredach knew they had to score again to keep their Cup hopes alive, and almost instantly, Jason Duggan scored a try giving the hosts the advantage once more. Ruane again reliable from the tee ensuring the Jes had to push for a try to turn this game on its head again in the final minutes.

Colaiste Iognaid went up the other end of the field knowing they had to score or their campaign would be over, and that is exactly what they did, as Shay McGovern proved to be the hero, going over with the clock about to tick into the red. Elwood was not able to add the extras leaving the Jes with a one-point lead with one play to go.

Iognaid managed to hold off the push from St. Muredach’s who gave it everything today but just fell short. The Jes now wait to see who will top Pool B and face them in the Senior Cup Semi-Finals.