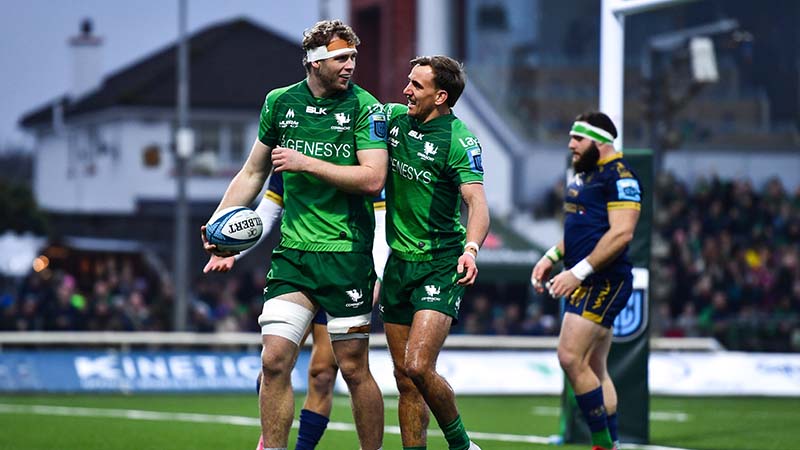 Connacht picked up a huge momentum boost as they ran in five tries to pick up a bonus point win over 14-man Benetton at The Sportsground this evening.

It was the result they needed after defeat last weekend, a host of chances but a strong display nonetheless by them, to defeat a strong benetton side who gave everything until the final minute.

With European Rugby now on the mind, Connacht will now doubt be happy to leave Galway with the maximum points haul, Jack Carty with 11 points from the tee, no doubt will boost his confidence.

The hosts were off the mark inside four minutes, second row forward Niall Murray gathered the pass from Jack Carty, it was a lovely line from Connacht, the 6-foot 7 frame of Murray took off like a steam train and no one could catch him as he went over, with Carty adding the extras from the kicking tee.

Benetton looked to address their deficit shortly after, a crossfield kick bounced well into the hands of Marcus Watson, but the winger was tackled well short of the line, with no cover to support their cause Connacht turned the ball over to clear the line.

A sloppy error by the Western Province was punished by Benetton for an equaliser, Mack Hansen tried a break but was tackled to the ground, the ball found it’s way to Watson on the flank, he looked up and dashed clear with no one able to stop him, the conversion levelling matters after 18 minutes.

The lead was short lived however, just five minutes later, Connacht off a lineout went to the back where Conor Oliver found Bundee Aki who quickly passed to Paul Boyle and he powered his way over the line, Carty making no mistakes to put Connacht seven clear.

It was all Connacht for the remainder of the half, a good kick and chase from Hansen put Benetton under pressure, forcing a penalty which Connacht again opted to kick for touch, working everything well from the lineout but Oisin Dowling was held short of the line.

Carty was having a solid performance in the first half, he produced a pin point accurate 50/22, the referee would penalise Benetton for closing the gap at the resulting lineout, Carty pointed to the posts to land his third kick of the day, with the hosts going in ahead 17-7 at the break.

Like a copy and paste job into the second half, Connacht added their third try four minutes after the restart, this time it was their pack that did all the work after some pressure was applied to the Bentton defence, they laid siege to the posts but it was Finlay Bealham that powered over for the score, Carty making it 24-7 as the hosts started to put a foothold in the tie.

Boyle showed his defensive abilities as he did superb;y well to stop Thomas Gallo grounding the second Bentton try after 51 minutes, the number 8 wrapping him up to stop the grounding, they were living on the edge as Gallo was again held up but a call for offside saw the visitors with another chancer to score.

Benetton threw everything at the Connacht line, the hosts in danger of seeing someone go to the bin for ill discipline, but after going wide Marco Zanon crossed for the second try, Jacob Umaga’s conversion reducing the gap to 24-14 after 54 minutes.

The game fell into a lull period shortly after the Benetton score, both sides guilty of being sloppy as Connacht were unable to really pull clear, they would be given the chance however as Scott Scrafton was shown a straight red card for a high challenge in the 65th minute.

Just three minutes later they secured the bonus point, Bundee Aki was almost over the line as Connacht used the man advantage well, he was held up but substitute scrum half Caolin Blade was quick to pick and go as he dove over the line, Carty with the easiest of conversions to make it 31-14 after 68 minutes.

Benetton pushed for a late losing bonus point Tommaso Menoncello got over in the 78th minute, but Connacht ran the clock down well in the final minutes to seal the win with Dylan Tierney Martin adding the fifth try with the final act, as the Italians narrowly miss out on points.