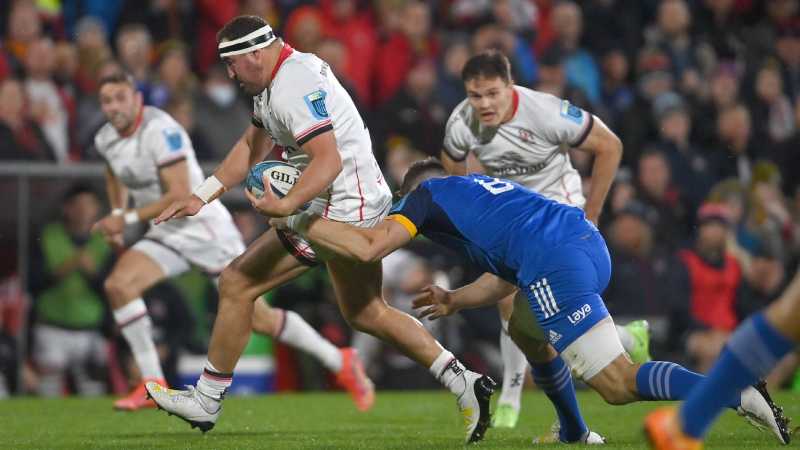 At a raucous & rainy Ravenhill, it was Leinster who took the bragging rights as they defeated Ulster 20-13 in a feisty Interpro in Belfast.

First half tries from Ryan Baird & Dan Sheehan set the visitors on their way as they settled into a 20-3 lead. Ulster rallied in the final quarter, with John Andrew going over, but it was to no avail on the scoreboard.

Despite monopolising possession early on, Ulster were shown the meaning of clinical by Leinster’s first visit to their twenty-two.

The men in blue built the phases before Garry Ringrose executed a perfect pass out wide to flanker Ryan Baird, who barged past John Cooney & burrowed over, Ross Byrne landing a fine conversion.

Ulster replied with pressure of their own, coming up just short of the try line before Cooney notched a penalty for 7-3.

Hooker Sheehan then got over for his fifth try in two games from a rampant Leinster maul but a cheap concession on Ulster’s part.

Amidst a downpour of rain, Byrne added penalties either side of the interval & Leinster looked entirely in control.

However, after concerted indiscipline, Leinster were reduced to fourteen, full-back Jimmy O’Brien sin-binned.

Immediately, the man advantage yielded a score, Andrew touching down after a well-executed lineout.

Moments later, young winger Aaron Sexton sent the stadium into raptures when he dotted down from Mike Lowry’s neat pass. However, the try was disallowed as Sexton’s grounding of the ball was unsure, spotted by the TMO and the score chalked off.

Three more points from Cooney took them within losing bonus-point territory but the arrival of Sexton senior, Ireland’s captain alongside John Ryan’s experience was key as Leo Cullen’s side showed their game management.

Lots for Andy Farrell to digest whilst Ulster will rue their lacklustre start.