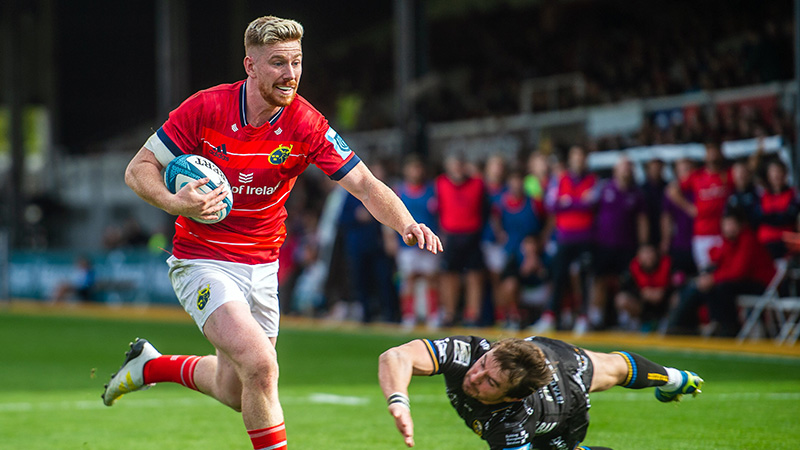 Munster have recorded another defeat on Welsh soil, as Rio Dyer’s late try secured a 23-17 win for the Dragons.

JJ Hanrahan came back to haunt the Munsterman the fly half showing his quality from the tee, kicking six penalties his penalty at the death enough for a six-point winning margin.

Ben Healy gave Munster an early 3-0 lead with just over two minutes gone as he landed a close range penalty, punishing some ill discipline from the Dragons.

Kerry native JJ Hanrahan was back against his old side, he levelled the tie after nine minutes with his first penalty of the day, before making it 6-3 by the 15th minute.

Hanrahan was having a field day from the tee as Munster were guilty of some ill discipline, they lost both Keith Earls and Jean Kleyn to injury early in the half. Hanarhan would kick another three penalties for a 15-3 lead by the 34th minute.

Back came Munster and the Dragons would be dealt a double blow minutes later, Rio Dyer was high with a tackle on Simon Zebo, the ball went out for a lineout, after working the phases the frame of Stpehen Archer bulldozed his way over.

TMO was summoned to watch back the tackle on Zebo, with Dyer sent to the sin bin shortly before Healy made it 15-10 with the conversion.

Now down a man the Dragons were looking to finish the half strong, it was working well until Healy danced his way through to cross over for the second Munster try, the fly half with an exceptional conversion near the sideline to make it 17-15 in the Irish provinces favour at the break.

The second half was a lot more compact with the teams trying to be more methodical in their gameplan, both kicking in behind, both looking to gain ground, but plenty of turnovers reduced the scoring chances, possession the main aim near the opponents line.

Some errors were creeping in to the teams, Munster certainly guilty of knock ons to cough up the possession, some forward passes also halted their momentum.

It took until the 70th minute for the first scoring chance of the second half, Hanrahan looking to kick a sixth penalty but it drifted wide.

Rio Dyer would be clinical to cross for Dragons try after 71 minutes, evading two tacklers before gliding past Mike Haley to reach the line, Hanrahan missed the conversion as the Dragons were three ahead 20-17.

Hanrahan would have the final act a close-range penalty to add a final three points to their winning margin.