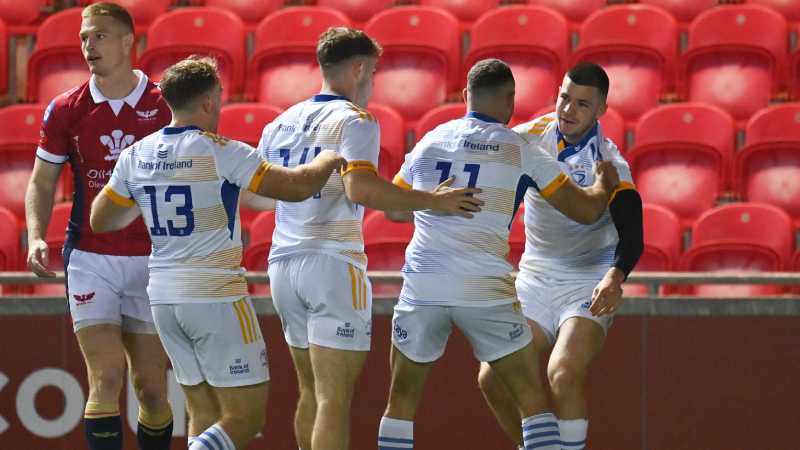 Chris Cosgrave, Rob Russell and Thomas Clarkson all touched down along with two other penalty tries in a game they dictated from the first whistle.

It was an ill-disciplined affair, with four players receiving a yellow card during the eighty minutes.

With their Irish internationals away because of the Autumn Internationals they would have been happy to get the result. Debuts for Tadhg McElroy, Charlie Tector and Ben Brownlee was a real positive.

The crowd had barely got into their seats when Leinster opened the scoring after just forty seconds. Fullback Chris Cosgrave getting over in the corner after a good backline move. An ideal start for the visitors.

The league leaders dominated much of the opening quarter, but against the run of play the hosts took their opportunity. A lovely pass from their captain Jonathan Davies found Steff Evans who scored the try.

Five minutes later, Leinster found a response, extending their lead once more. Rob Russell chased his own kick through ball which he touched down for his third try of the season. Ross Byrne converted the try. His team led 14-5 at the break. Try scorers Cosgrave and Russell both put in impressive performances.

The away side started the second half well, looking comfortable in possession. They got a penalty, kicking it to the corner to get red zone territory.

John McKee threw it to Ross Molony and after some sustained pressure, Thomas Clarkson powered over the line for the try. Byrne did his job from the kicking tee.

Things looked to be going from bad to worse for the Welshmen when Dan James and Johnny McNicholl were both sent to the bin. McNicholl’s was deemed deliberate knock down and with Leo Cullen’s men in a promising position it was deemed a penalty try.

To their credit, despite only have thirteen men on the field. Dwane Peel’s men tried their best to keep the score line down in this period. Their replacements all made an impact especially Willgriff John who was offering himself up for the carries.

Substitute Michael Milne was sent to the bin for Leinster, while Welsh scrum half Gareth Davies became the third man from his team to receive a yellow card and with McElroy at the back of a steamrolling maul, the Irish team were awarded another penalty try and their fifth try of the game.

It finished 5-35. It was another hard-fought win for an unbeaten Leinster.