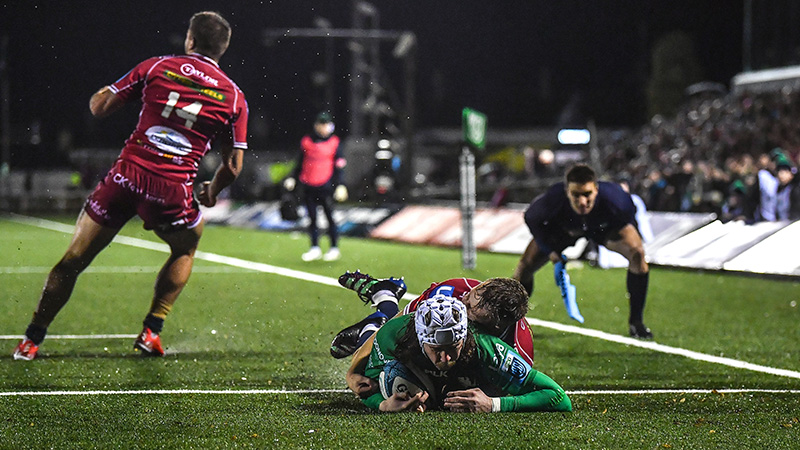 A controlled second half performance guided Connacht to a 36-14 victory over Scarlets tonight.

Tries scored by Niall Murray, Irish international Mack Hansen, substitute Jack Aungier and a penalty try got them the all important bonus point.

Outside centre Stefan Evans scored the only try of the night for the Welsh men in what was a disappointing performance from them.

It is only Connacht’s second win from their opening six games. They’ll be looking to build on that next week against the Ospreys.

It only took Connacht thirty seconds to open their account. Second row Murray blocked down Kieran Hardy’s box kick, running in for an easy score. It was the dream start.

Scarlet’s responded well. They got into the opposition half, building the phases nicely before they were given a penalty because of a high tackle. Sam Costellow kicked the penalty to get his team on the board.

Although, Jack Carty restored Connacht’s 5-point advantage almost instantly, through a penalty of his own.

In the 16th minute, the scores became level. A poor Carty kick was fielded by Johnny McNicholl who spotted the gaps from broken play. He passed to his inside centre Evans who got in for the try.

Both teams had periods of possession. They traded a penalty each. It was 11-11.

A good restart by the hosts, forced the error out of the opposition. They were camped in  the red zone for a few minutes before  Hansen got the ball out wide to score their second try of the night. The home team had a 16-11 lead at halftime.

Andy Friend’s charges started the half well. They got themselves in the right area of the pitch again. They looked as if they were about to score, edging closer to the line before their number eight Paul Boyle was sent to the bin for dangerous play.

Despite being reduced to just fourteen men. The home side continued to control the game and it wasn’t long before they were in again.

A big carry from substitute Aungier was pushed on by Murray who helped his prop over for the try.

Scarlets substitute Rhys Patchell kicked a penalty which was matched by David Hawkshaw. The men from the west now led by ten points.

They dominated much of the closing stages, scoring two more tries. One was a penalty try and the other was by Hansen who chased Carty well measured kick to touch the ball down for their fifth try. The game finished 31-14.