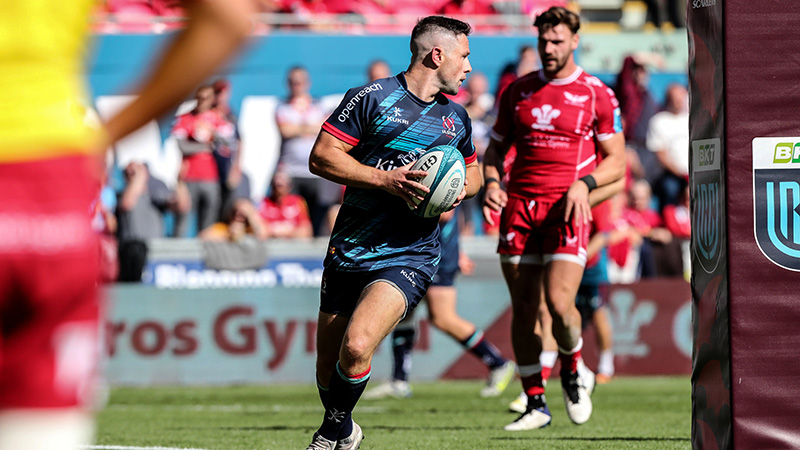 It was a 12 try thriller in Llanelli as Ulster defeated Scarlets 55-39 in the United Rugby Championship. They take a bonus point win back to the Kingspan Stadium ahead of next week's clash against Leinster.

A scintillating, end to end contest from the off with six tries scored during the opening 40 minutes, with another six scored in the second.

Ulster dominated the early stages with Nick Timoney and Stuart McCloskey causing Scarlets issues with their powerful carries. Just after the fifth minute, captain Alan O’Connor burst over from close range for the game’s first try.

Cooney converted with a relatively easy conversion to extend their lead. Ulster’s relentless attack remained and minutes later they found their second try.

Constant pressure proved tiring for the Scarlets’ defence, and Marty Moore powered over from a couple of metres out. Cooney converted again and it was starting to look like it could be a long day at the office for the hosts.

Just minutes later, the fourth try of the game was scored, just after the 20th minute. In a move starting with Costelow inside his own half, the Welsh side worked through the phases excellently with some brilliant, free flowing rugby, resulting in a Stefan Combeer try in the corner.

Although Costelow missed the conversion, he put his side into the lead five minutes later with a well taken penalty, turning the game upside down within a matter of minutes.

A critical turning point in the first period was the yellow card awarded to Sam Costelow after colliding with Ulster winger Arron Sexton in the air.

Just over two minutes later, a Mike Lowry line break carved the Scarlets defence open before unselfishly offloading into the path of John Cooney who dived over to give Ulster the lead again.

Cooney converted his own try to give his side a six-point lead heading into the final moments. With the time now in the red zone, Dan McFarland’s side opted to keep the ball in play and search for a bonus point.

This risk worked out and Mike Lowry yet again gained yards after dancing through Scarlets’ attempted tackles. After recycling the ball, Marcus Rea crossed for the all-important bonus point try. Cooney’s conversion sent Ulster into the dressing rooms at half time with a 28-15 lead.

The second half started in the exact same fashion as the first half and there was a try scored after less than two minutes. Billy Burns’ pass was intercepted by Scarlets’ lock Vaea Fifita who ran from the halfway line and dived under the posts. Costelow converted and brought them within six points of Ulster.

John Cooney quickly replied with a penalty from the ten-metre line to make the game a two-score game yet again.

Ulster found their first try of the second period after some big carries from Kieran Treadwell and a turnover won inside the Scarlets’ 22. Burns backed himself from close range and was rewarded, with Cooney maintaining his 100% record from the tee.

The high pace of the game continued, as did Scarlets’ fight with Dafydd Hughes crossing after a fantastic rolling maul from the hosts. Costelow added the extras to keep his side in the game.