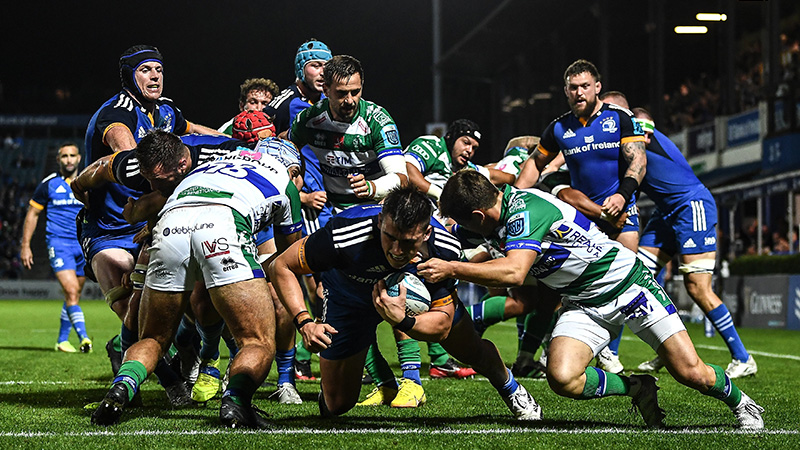 Leinster maintained their 100% start to the season with a bonus point 42-10 win over Benetton Treviso at the RDS.

Four tries from Dan Sheehan as well as tries from Josh Van Der Flier and Luke McGrath capped off a good night’s work for Leo Cullen’s side.

Leinster got their first home fixture of the season off to an ideal start inside the opening ten minutes.

A brilliant cross field kick from Robbie Henshaw fell kindly into the path of Caelan Dorris. Dorris offloaded the ball into the path of Dave Kearney, but the veteran winger was pulled back off the ball by Mattia Bellini, leading to a yellow card being shown to the Benetton man.

After kicking to touch, Leinster opted for a maul and Dan Sheehan powered over for his first try of the season. Ciaran Frawley converted to add the extra two points to his side’s tally.

Continued pressure over the next ten minutes helped Leo Cullen’s side to territory inside the Benetton 22 metre line. A quick pick and go from the back of the ruck saw Sheehan drive over for his second try of the game and Frawley converted to give Leinster a 14-point lead.

Giacomo Da Re added a penalty for the visitors midway through the first half, but just before the half hour mark, the hosts scored again.

Leinster opted for the rolling maul from the Benetton five metre line and yet again, Sheehan dived over the try line to complete a first half hat trick and give his side a 21-3 lead at the interval.

After dominating the early stages of the second half, a slick move down the blind side by Ross Byrne and Jordan Larmour led to Josh Van Der Flier diving over in the corner. Ross Byrne converted to extend Leinster’s lead.

Five minutes later Leinster struck again, through the in-form Dan Sheehan. Yet another maul was the downfall to Benetton Treviso’s chances at taking anything away from the RDS.

The Italian outfit did find a try on the hour mark through debutant Manfredi Albanese, with Giacomo Da Re converting from a difficult angle.

With just under ten minutes remaining, Leinster found their sixth try of the evening courtesy of Luke McGrath. Some quick thinking from the scrum half, who had been lively from the off, saw him squeeze through a gap in the Benetton Treviso defence and over the try line.

Next up for Leinster is a trip to the Kingspan stadium to face Ulster next Friday night.