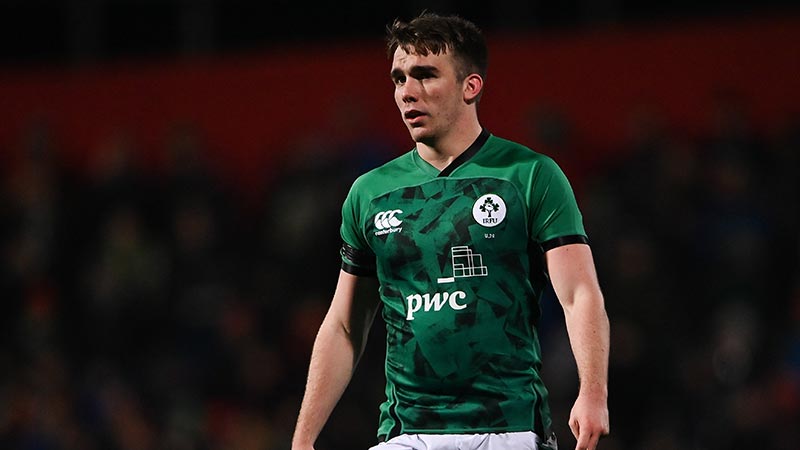 Growing up in a family, a parish and county where Gaelic Games was the only show in town, Bornacoola native Shane Mallon’s journey to getting an academy contract with Connacht Rugby brings a new meaning to commitment and sacrifice.

Connacht recently announced the 20-year old’s contract, and Mallon has had quite the unique path to this point with the lack of rugby emphasis in County Leitrim causing him to leave home in order to climb the ranks. Having appeared in this years Six Nations with Ireland U20s and now getting a contract with his home province, his dedication has paid dividends.

“You make sacrifices growing up and one of mine was to leave home. Every single bit of the journey was worth it for me.” Mallon told FinalWhistle.ie.

Although he stressed that rugby wise anyone with the right mentality can progress, he admitted that the leaving home element did make his journey tough at times.

“When I was playing in Dublin, the players from Dublin could go home and see friends and family. The hard part for me was that you’re away from you’re family and friends. On that side I’d say it is tougher coming from somewhere like Leitrim” added Mallon.

Mallon indicated that the commitment needed to play rugby at a high level is always high but that his circumstances probably added to the levels that were needed, Perhaps that is very few Leitrim men have taken the same strides and none have got an academy contract.

He pointed out however that these challenge have only made his success more sweet, a type of success that hasn’t really been seen before in Leitrim with GAA being at the fore. Mallon’s uncle Seamus was one of Leitrim’s top hurlers in the 90s and noughties and is now a manager at Bornacoola GFC, while his mother is sister to the chairman of the Cavan County Board and another uncle, Kevin, is a well known Gaelic referee in Leitrim.

Hailing from a family steeped in GAA tradition, Mallon played football with Bornacoola and hurled for Carrick through most of his teen years, also playing with distinction at county level in both sports. He pushed the boundaries and now fills the parish with pride on a rugby level. As he was growing up there was no rugby club in Carrick-on-Shannon with the current one only being set up after he had already joined Longford, so his story is an unusual one coming from Leitrim.

“For me football and hurling were very important to me as a kid and right through to 17 or 18. Once I started playing rugby it was always in the back of my head that I wanted to go as far as I could in rugby. I actually can’t emphasise enough for young people to keep going with every sport you can until you have to stop because all it does is help with your skills.”

At Bornacoola right on the River Shannon, everything in place for him to go down the GAA route, but Mallon made a big leap towards rugby when he left Longford RFC at the age of 15. He had played there since the age of four but decided to leave after the Junior Cert for boarding school in Roscrea in Tipperary, meaning he could focus on rugby and his studies simultaneously.

“Moving to Roscrea was a big decision but my parents didn’t push me one way or the other, they kind of just allowed me to make my decision. When I was playing with the Midlands Development squad, we were training in Tullamore twice a week. During my Junior Cert I was leaving school and going straight to training and getting home at around half nine so there wasn’t much time to study.”

The Connacht recruit attributed Roscrea as a landmark in his journey, saying it was where “rugby became number one.” It wasn’t long until the time came where he had to give up football and hurling, and as he began his degree at UCD and broke into Leinster’s underage squads, rugby really became his priority.

“Training had picked up intensity and one or two lads got hurt playing hurling. The coaching staff eventually asked me not to and I was like fair enough. Rugby definitely took the fore but the hard part of that was leaving home where I had been playing football with my local parish.”

Earlier this year brought a moment that really put these commitments into perspective, as Mallon wore an Irish shirt for the first time at the U20s Six Nation where Ireland were victorious. He started the first two matches again Wales and France putting in more than commendable performances.

“It was always a goal to push for the six nations team. Getting into the squad and playing the first two matches was so surreal.” He reminisced on coming home after the tournament with chuckle.

“Coming home after that was very funny seeing people come up to my parents about it. Hearing people talk about it, it didn’t really set in. A lot of people from Leitrim wouldn’t have seen me play since I was about 13 because of the move to Roscrea, even my uncles and aunties. So I was just excited to show them what I was good at.”

Mallon has settled in nicely at the Connacht camp, and was full of praise for the other players and the management staff. The winger is delighted to represent his home province, adding, “I thank Leinster for the amount they brought me on, but I think there’s always a bit of green in you and my family members would be Connacht fans so they’re happy to see it.”

He expressed his excitement going forward with Connacht but joked that his uncle Seamus is always trying to get him back on the gaelic pitch. Having broken barriers for rugby in Leitrim, he discussed wanting to see it become more prominent in the county.

“It would be great to see young kids picking up rugby in Leitrim. It would give them that physical edge and I think some people are afraid to go into contact when playing football. Playing rugby would help them find that medium for when they’re playing football.”