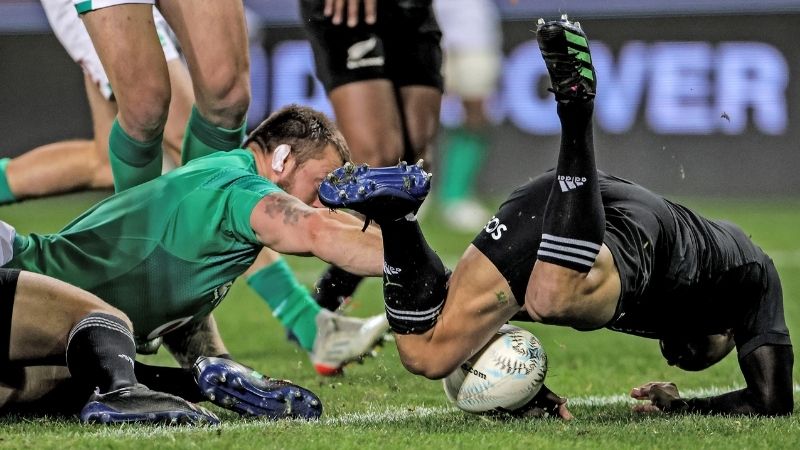 Ireland levelled their Summer Test Series with New Zealand courtesy of a superb 23-12 victory, their first on Kiwi territory.

Despite dominating the opening 40 minutes, Ireland went in at half-time only 10-7 after an ill-tempered first half which saw New Zealand’s Angus Ta’avao red-carded, and three others sin binned.

However, Andrew Porter’s brace of tries and the nerveless kicking of Johnny Sexton saw the boys in green make history.

Ireland began with a vengeance and within two minutes, had a score to show for their efforts.

The All-Blacks indiscipline was starting to turn ugly and Leicester Fainga’anuku was sin binned for a high and late tackle on Mack Hansen. Moments later, Ofa Tuungafasi joined him in the bin after a late tackle of his own, on Garry Ringrose.

On the half-hour, replacement tighthead prop, Ta’avao was red carded for a tackle on Ringrose, that saw the players suffer a nauseating head-to-head.

Ireland couldn’t capitalise as despite dominating territory, James Lowe knocked on in their most glaring of botched opportunities as New Zealand made them pay.

James Ryan was yellow carded for cynical offside play, albeit that prevented a try. Beauden Barrett touched down a fortuitous kick after resilient defending from Ireland. 10-7 half time was a bitter pill for Andy Farrell’s side to swallow.

If the visitors were dispirited by their late concession, they avenged it in the 49th minute. Bundee Aki, who replaced Ringrose, stormed into the Kiwi’s half, Beirne ran a fantastic support line and calm recycling of possession eventually led to Porter rampaging in under the posts.

Sexton added a penalty for 20-7. Caelan Doris also made a try-saving tap tackle to stop Jordie Barrett getting away, the clean-up completed by Porter.

With 12 minutes remaining, another kick from Sexton gave Ireland a crucial three-score advantage. Despite substitute Will Jordan’s speedily taken try in the 78th minute, Ireland resolutely saw the game out with some simply heroic defending.

A historic result that levels the test series up ahead of next Saturday’s now, mouth-watering, final match and test decider. If the nerves jangled here, then brace yourselves for another tense, nail-biting 80 minutes next week.