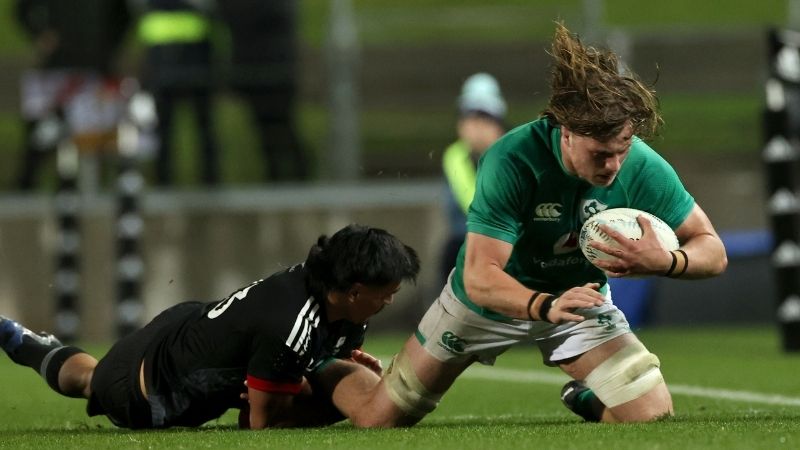 Cian Prendergast was a proud man watching younger brother Sam kick over the winning penalty as the Ireland U20s defeated England by a point yesterday in the Summer Series.

Cian has made a name for himself in recent times winning the Nevin Spence Young Player of the Year award this year, and now is currently in New Zealand with the first team. Regardless he was awake in the early hours of the morning to watch his younger brother Sam give the U20s their first win of the tournament.

“It was a pretty proud moment, watching him slot over that kick. Both my parents and my sister were there to see that game,” he added.

Cian, who plays as a lock or flanker, was on the U20s himself back in 2020 before breaking into the first team. He was part of the side that beat England 39-21 that year in the Six Nations, so it no doubt fills him with pride to see his brother pull off something similar.

Cian is on his first ever summer tour with Ireland as they take on the All-Blacks in the second test this Saturday, but the 22 year old made sure he was up to watch Sam score the decisive penalty in Verona, and give Ireland a 37-36 victory. The penalty was one part of a 15 point tally for Sam, who was playing at number 10, and was hit from a notably long distance out.

It brings a dramatic and positive end to Ireland’s involvement in the tournament. It was a back and forth contest where England had a 36-34 lead with 10 minutes to go, but the Leinster and Lansdowne FC man held his nerve to win it for Ireland.

Speaking to RTÉ sport, U20s manager Richie Murphy pointed out that wasn’t necessarily expected to take the kick. “We had a long range penalty kicker on the pitch as well in George Coomber, but Sam decided that he wanted it. He was obviously in the groove because he had been in the game,” said Murphy.