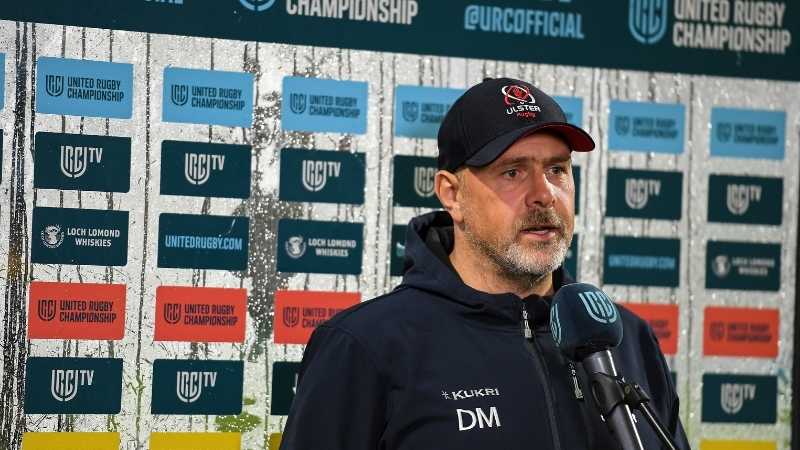 Ulster coach Dan McFarland is expecting another “brutal, physical challenge” as his side booked a home quarter final after overcoming the Sharks 24-21 in the United Rugby Championship.

Tries from Michael Lowry, Stuart McCloskey, and James Hume handed Ulster a massive win despite a late surge from the visitors.

Speaking to Premier Sports regarding the significance of a home quarter final, boss McFarland insisted that stadiums don’t win you matches, however for the fans he was delighted.

“The bottom line is you would prefer to be at home to play a play-off game, just as much for the fans.”

Overcoming the disappointing result to Toulouse in the Champions Cup has been a real challenge for McFarland he said. Although, they have bounced back with massive wins away to Edinburgh and last night’s result as well.

“It wasn’t just the Toulouse game, it was the game in Stormers. We had a game taken from us which really kicks you… It is tough.”

“You just go back to what you know is the foundation of your game.”

The Englishman was honest in his evaluation of his opponents and their performance.

“They actually make a lot of mistakes. I actually thought they were sharp tonight than they have been in previous games. They have such speed in their back three and their physicality.”

Regarding the two late tries from the opposition, McFarland added;

“If you get things wrong against the Sharks in terms of spacing in defence, in terms of any area you don’t get right around the breakdown or with the chipped-kick in behind, their pace is going to kill you and that is what killed us in the last four minutes.”

The Ulster head coach wouldn’t be drawn into who he would rather face in the quarter final whether that be the Sharks again or other South African opposition.

“It is not something I will be dwelling on.”

“Bottom line is I don’t mind. We are playing at home. We’ve played them all now and they are all tough teams. Whoever it is, it’ll be a great day at Kingspan Ravenhill.”