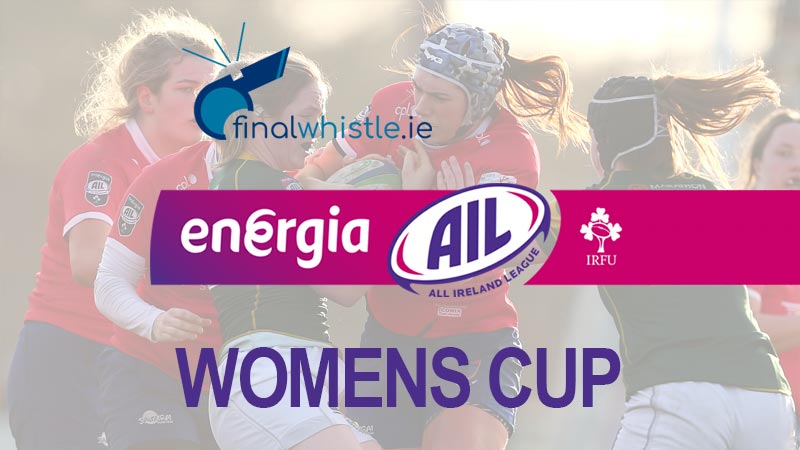 It was tries galore during the first round of the Energia All Ireland Cup this weekend with Railway Union picking up a huge win for the AIL League title contenders. Wicklow, Blackrock, Galwegians and Ballincollig all picked up victories while Cooke and Queens University were awarded walkovers.

Railway trashed Malone in a 15 try victory over Malone. Full back Ava Ryder and number eight Deirdre Roberts went over for a hat trick of tries as well as doubles from both Keelin Brady and Siobhan McCarthy secured the win for Railway. They face a league match against Cooke next week while Malone travel to Tanner Park to face Ballincollig.

It’s three wins a row for Wicklow after a comprehensive victory over Cavan today. Tries from Katherine Ward, Caitlin Griffey, Beth Roberts, Erin McConnell, Sarah Gleeson and Naoise O’Reilly secured the win for the Garden County side. Wicklow face Suttonians at Station Road next in the AIL League.

Galwegians defeated Kerry at Tralee RFC thanks to tries from Saskia Morrissey, Megan Walsh and Jessica Loftus as well as eight points from the boot of Emma Keane. Kerry’s points came courtesy of Vanessa Dineen and Muirne Wall. Galwegians face the high-flying Old Belvedere next week.

The Cork side cruised to a comfortable win over OLBC today. Tries from Lauren Fahey,Mona Fehily, Heather Kennedy, Gemma Lane, Kelly Griffin, Orla Creedon and a double from Denise Redmond was enough to breeze past their opponents. Kelly Griffin added eight points from her conversions also for Ballincollig. They host Malone next week at Tanner Park and will be eager to bring this form into next week’s game.

Blackrock beat Tipperary comfortably at Thurles in a great showing away from home for the Dublin side. Michelle Claffey and Eimear Corry both went over for two tries each as well as tries from Anna Pottertan, Emma Hooban, Maggie Boylan and Katie Fitzhenry. Out half Lisa Mullen added a further six points from the conversions to seal the win for Blackrock.