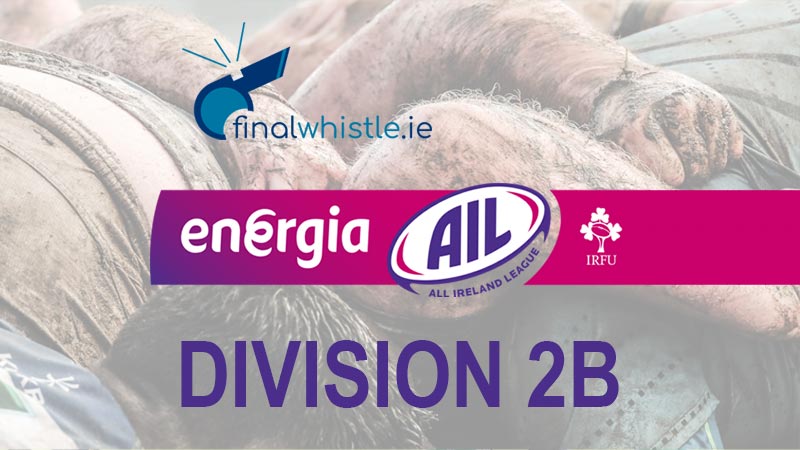 Greystones go nine points clear at the top of Division 2B after a narrow victory over promotion rivals Belfast Harlequins. Malahide got their first victory of the campaign, leapfrogging them out of last place and making Galwegians the new basement side.

Both sides claimed bonus points at Heffernan Park but the Mayo outfit are still searching for their win of the AIL season. Wanderers find themselves in second place but nine points adrift from Greystones. The Chaps welcome Blackrock College to Merrion Road next week in a Dublin derby while Ballina travel to Dungannon in search of their first win.

Paul Lennon’s side came from behind to snatch their sixth win of the season. Quins lead 9-0 before Conor McAleer’s try and eight points from the boot of Killian Marmion secured their perfect start to the campaign. Stones travel to Crowley Park next week to face Galwegians while Belfast Harlequins take on Sligo at Hamilton Park.

Blackrock slipped down to seventh place in the table after a third loss on the bounce. A Josh Reeves penalty with the final kick of the game stole the win for the Connacht side and propelled them up to fourth place. Rock face the high flying Wanderers next while Sligo welcome Belfast Harlequins to Hamilton Park.

Corinthians made it two bonus point wins in their last two games after an outstanding victory over Dungannon. The Connacht side started the season poorly but now sit in sixth position after three wins from six games so far. It’s a trip to Estuary Road to play Malahide next for Corinthians while Dungannon host winless Ballina.

Malahide claimed their first win of the AIL campaign today and jumped over Galwegians putting Wegians into last place. The Dublin side will be eager to use this win as a platform to kickstart their campaign and face the in-form Galway Corinthians next while Galwegians host table toppers Greystones at Crowley Park.