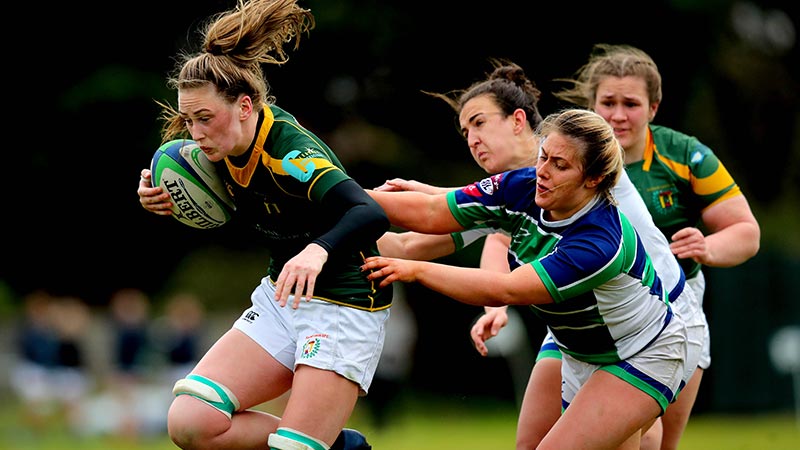 It was tries galore during the Energia Women’s All Ireland League Matchday Three this weekend.

Ballincollig returned to winning ways with a 31-17 victory over Galwegians at Tanner Park. Róisín Ormond and Gemma Lane scored two tries each and Clare Coombes also got in on the action to secure a bonus point victory for the Cork side.  Galwegians tries came through centre pairing Orla Dixon and Ursula Sammon but it wasn’t enough to give them their first victory of the season. Ballincollig travel to in form Belvedere in two weeks time while Galwegians host Suttonians at Crowley Park.

Blackrock College RFC cruised to a 63-0 victory over Wicklow at Stradbrook with Eimear Corri going over the try line four times and replacement Maggie Boylan scoring a hat trick during the 80 minutes. Michelle Claffey, Emma Hooban and Aoife Moore all scored as well for the home side to secure a bonus point victory over last place Wicklow.

Railway Union were held to a 0-0 draw away to Malone today. Railway host UL Bohemians at Willow Lodge in a fortnight’s time while Malone travel south to Wicklow.

UL Bohemians made it three bonus point victories from three to fire them to the top of the table after a 46-17 victory over title rivals Old Belvedere at the UL Arena. Sarah Quin, Courtney Duhig, Aoife Corey, Chloe Pearse ,Nicole Cronin, Stephanie Nunan, Helen McDermott and Carrie Griffin provided the tries for UL Bohemians. Belvo’s tries came through Ailbhe Dowling, Lesley Ring and Clare Gorman providing a consolation for their team but it wasn’t enough to challenge table toppers UL Bohemians.

Bohemians sit three points clear of Railway Union at the top of the table with Blackrock College and Old Belvedere two points back making up the top four. Wicklow and Galwegians remain pointless after three games and both sides will be eager to put points on the board in coming weeks.