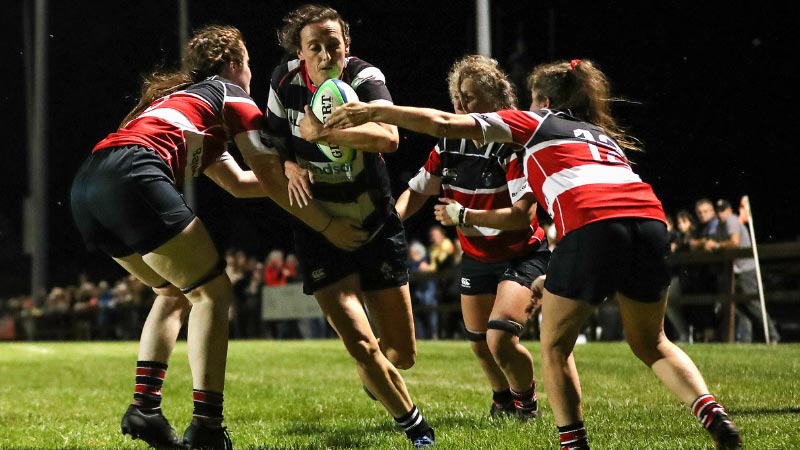 Last weekend’s Energia Division 1 Women’s All-Ireland Rugby League opening ties whetted the appetite of fans who had not borne witness to the action since 2019, but fear not the entertainment returns this Saturday with five fixtures throughout the course of the day.

Newcomers Ballincollig go to Shaws Bridge and Cooke in search of their second win on the bounce, while on the other side of the coin fellow 2021 debutants Wicklow are looking to make good on their opening weekend defeat but face stiff opposition in reigning champions Railway Union at Willow Lodge.

Elsewhere Suttonians play hosts to Blackrock College at JJ McDowell Memorial Grounds, Malone and Old Belvedere come to blows at 5pm in Ollie Campbell Park and the 12pm fixture sees Galwegians battle it out against UL Bohemians in Crowley Park.

The talk of series one had to be that of the Cork’s Ballincollig’s victory versus Suttonians in their inaugural restoration match at the level, wrapping up a 14-3 score thanks to efforts from livewire Kelly Griffin. The Garden County’s introduction didn’t go as planned, suffering a 63-0 occurrence but nonetheless proud they have joined the ranks of the AIL.

Their next opponents are well used to racking up the points, overcoming Blackrock previously 25-11. There Kate McCarthy, Nikki Caughey, Aoife Doyle and Niamh Byrne were on target for their side and they will be hoping to replicate such undertakings this weekend.

UL concluded 46-12 against Cooke last week but will be confident to be on the right flank of the result against Galwegians next, given the Westerner’s 25-17 loss at the hands of Malone.

Those Cregagh Red Sox are to lay challenge to the mighty Belvedere who have claimed international and Dublin LGFA star Hannah Tyrell back into their battalion. She’s joined by companion one’s to watch Ailbhe Dowling, Vic O’Mahony and captain Jenny Murphy.

The second round of nine stages to be completed before the 11th of December, it’s all to play for in the AIL and there’s #NothingLikeIt.