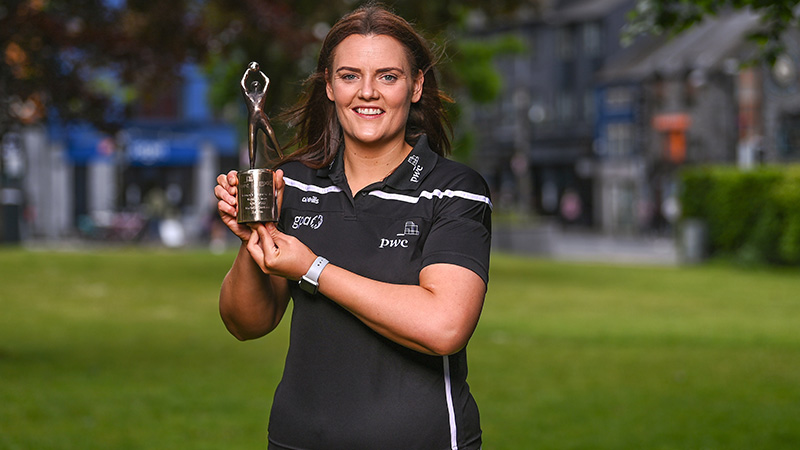 We’re nearing the business end of the Leitrim Club Championship group stages and this week, as well as our reporting panel, we added the opinion of Leitrim Manager Andy Moran to compile our selection for Team of the Week. Let us introduce who has made it this week and why.

The modern role of a goalkeeper can see them venture further and further from their own goal during games. St. Francis shot stopper Niamh McDonagh showed how effective she can be at both ends of the field, both saving a penalty and converting a spot kick in the first half. McDonagh also produced a number of vital saves in her side’s one point win over Dromahair.

Scores win you games but a hard working defensive unit will win you championships, the first of four inclusions for Ballinamore Sean O’Heslins this week after their fine victory over Mohill on Friday is Brian Banks. Solid and well versed at the back he and his teammates put in a strong showing at the weekend to restrict the powerful attacking contingent from Mohill.

The full back spot is occupied by Oisin McCaffrey. One of the stars in the Sean O’Heslins championship winning team from last year, on Friday he was tasked with taking care of Keith Beirne. His tenacious performance in this match up helped provide the platform for his teammates to kick the scores to see them one point winners on the night.

Aughawillan’s Noel Plunkett completes the full back line after an impressive showing this weekend, as the Aughawillian man helped ensure his side managed a crucial win, in what was a tight game their defensive fortitude helped them get one step closer to a quarter final spot.

The third and final member of the Ballinamore Sean O’Heslins back line is veteran Liam Ferguson. Using his skill and ability he can gather possession and work the ball up the field to create scoring chances, a tireless worker that makes his side tick when coming out from defence.

Glencar / Manor’s Paddy Maguire occupies the centre back role, after another quality showing in his club colours at the weekend, despite ending up on the losing side in Aughawillan. His performance caught our reporter’s eye at the weekend, he is a vital cog in their machine this season.

St Marys had a comfortable win at the weekend against Melvin Gaels, and a number of their players had their hand up for selection but Adam Reynolds stood out in their backline as one their pivotal players to get things moving, will be one to look out for in the coming weeks.

Taking the number 8 spot in the middle of the field is Aughawillian’s Fergal McTague, who essentially won a coin flip between himself and teammate Pearce Dolan for selection. Both have been stand out performers in each round of the championship so far. McTague was a key component in his side’s victory against Manor and he wins a spot in the team this week.

Another man who has been in contention over the last couple of weeks is Donal Wrynn, the Fenagh man earning his spot ahead of Jack Gilheany was named the previous week. Wrynn getting the nod after his side demolished Dromahair on Friday evening.

On a famous day for Leitrim Gaels ladies team, winning their first ever tie as the newest Ladies side in the adult grade, it was former Dublin player Catherine Roche Farrell who stole the show with a total of 5-4 including a goal in the first ten seconds of her side’s debut. A number of their players far exceeded expectations and could have featured here particularly the very impressive midfield pairing of Orla Smith & Rebecca Moran and goalkeeper Sonia Mulryan who saved a first half penalty.

No introduction needed for Kiltubrid’s Michelle Guckian. The Leitrim star is well used to picking up awards she once again put in a phenomenal display at the weekend to out St. Joseph’s to the sword. That result upsets the dynamic of the championship to give them a real chance of competing for honours this year.

His last minute point may have decided the tie against Mohill on Friday night, but it was only fitting with a man of the match performance from the diminutive Ballinamore man. Tom Prior is a worthy addition after his return from injury in recent weeks has been crucial for the champions as they look to defend their title.

Fenagh had a wealth of attacking players in their demolition of Dromahair on Friday, Ryan and Riordan O’Rourke performed well on the night, but as both have been selected in recent weeks the third element of their triple threat Oisin McLoughlin is well deserving of his inclusion this week with a score of 1-5 on Friday evening.

Sometimes games can be decided by moments. Kiltubrid, fresh from their opening day late defeat at Borncoola, appeared that history would repeat itself late on against fancied local rivals Allen Gaels. Step forward Kealan McKeon to convert an injury time penalty and secure a massive one point win for the home side. The second half substitute helped settle the ship and restart Kiltubrid’s championship campaign.

The final name on our team sheet needs no introduction to football fans across Leitrim, Muireann Devaney has been in sparkling form for Glencar Manor this year, taking her tally to 30 points in just two games, she has been integral to her side’s blistering start to the season.